Breach of B cell tolerance is central to the pathogenesis of systemic lupus erythematosus (SLE). However, how B cell tolerance is subverted in human SLE is poorly understood due to difficulties in identifying relevant autoreactive B cells and in obtaining lymphoid tissue. We have circumvented these limitations by using tonsil biopsies to study autoreactive B cells (9G4 B cells), whose regulation is abnormal in SLE. Here we show that 9G4 B cells are physiologically excluded during the early stages of the GC reaction before acquiring a centroblast phenotype. Furthermore, we provide evidence to indicate that an anergic response to B cell receptor stimulation may be responsible for such behavior. In contrast, in SLE, 9G4 B cells progressed unimpeded through this checkpoint, successfully participated in GC reactions, and expanded within the post-GC IgG memory and plasma cell compartments. The faulty regulation of 9G4 B cells was not shared by RA patients. To our knowledge, this work represents the first comparative analysis of the fate of a specific autoreactive human B cell population. The results identify a defective tolerance checkpoint that appears to be specific for human SLE. 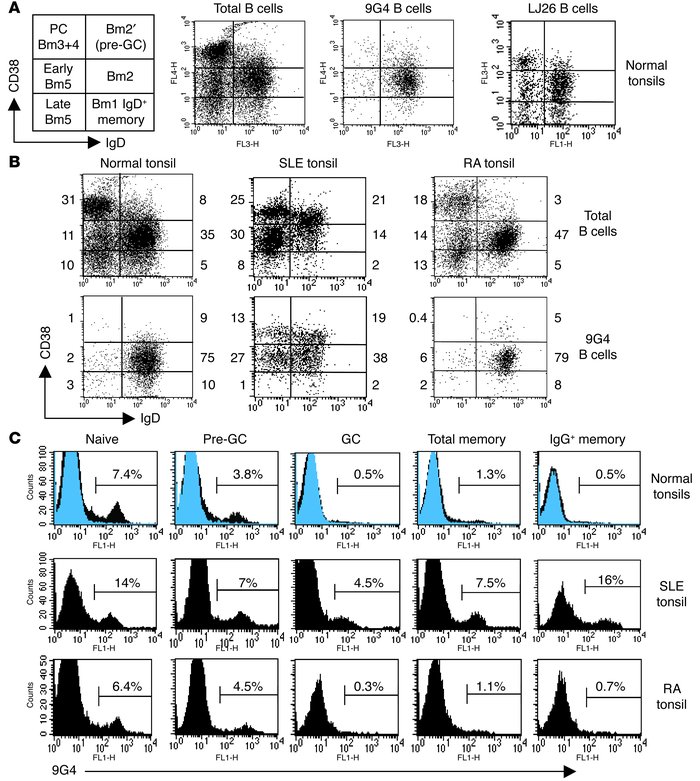 9G4 cells actively participate in GC reactions in SLE. () IgD/CD38 expression identifies the populations shown in the diagram on the left: IgD+CD38– (Bm1 and IgD+ memory); IgD+CD38+ (Bm2); IgD+CD38++ (Bm2′ pre-GC cells); IgD–CD38++ (Bm3 and Bm4 or centroblasts and centrocytes); IgD–CD38+ (early Bm5 memory); IgD–CD38– (late Bm5 memory); and CD38bright plasma cells (PC). Dot plots show the typical distribution of total, 9G4, and control VH3 (LJ26) B cells in normal tonsils. In every tonsil, 9G4 B cells were significantly underrepresented in the GC and memory compartments. () Tonsillar B cells from normal controls and SLE and RA patients analyzed as described above. Total tonsillar B cells demonstrate naive lymphopenia and expansion of pre-GC cells described in studies of SLE peripheral blood (). In SLE, 9G4 B cells are not blocked at the pre-GC stage. Instead, they are greatly expanded in the GC and memory compartments. Yet these abnormalities are not found in tonsillar B cells from RA patients where 9G4 cells are normally distributed. The percentage of each subpopulation is shown on the margins of the dot plots. () Histograms depict the frequency of 9G4 cells in normal, SLE, and RA tonsils. SLE patients show a large increase in the frequency of 9G4 GC cells and a 10- to 25-fold increase in IgG 9G4 memory cells compared with healthy controls and RA patients. Blue histograms represent the staining obtained with the corresponding isotype control antibodies (data shown for normal controls), while 9G4 histograms are depicted in black.