The myelodysplastic/myeloproliferative diseases (MDS/MPDs) are a heterogeneous group of myeloid neoplasms that share characteristics with chronic myeloproliferative diseases and myelodysplastic syndromes. The broad spectrum of clinical manifestations makes MDS/MPDs extremely difficult to diagnose and treat, with a median survival time of 1–5 years. No single gene defect has been firmly associated with MDS/MPDs, and no animal models have been developed for these diseases. The association of deletions on chromosome 20q with myeloid malignancies suggests the presence of unidentified tumor suppressor genes in this region. Here we show that the recently identified death inducer–obliterator (Dido) gene gives rise to at least 3 polypeptides (Dido1, Dido2, and Dido3) through alternative splicing, and we map the human gene to the long arm of chromosome 20. We found that targeting of murine Dido caused a transplantable disease whose symptoms and signs suggested MDS/MPDs. Furthermore, 100% of human MDS/MPD patients analyzed showed Dido expression abnormalities, which we also found in other myeloid but not lymphoid neoplasms or in healthy donors. Our findings suggest that Dido might be one of the tumor suppressor genes at chromosome 20q and that the Dido-targeted mouse may be a suitable model for studying MDS/MPD diseases and testing new approaches to their diagnosis and treatment. 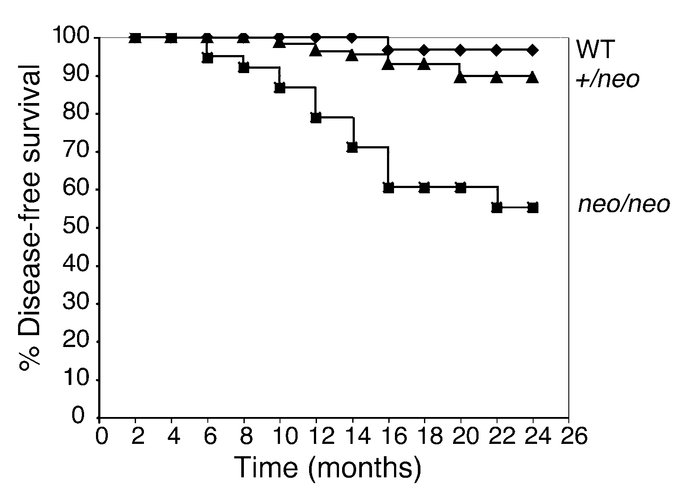 Targeting causes MDS/MPDs in mice. Mice showing 3 or more spleen or bone marrow symptoms were diagnosed with MDS/MPDs. Percentages of surviving, disease-free mice are shown as Kaplan-Meier curves for WT ( = 30), ( = 86), and ( = 38) mice.