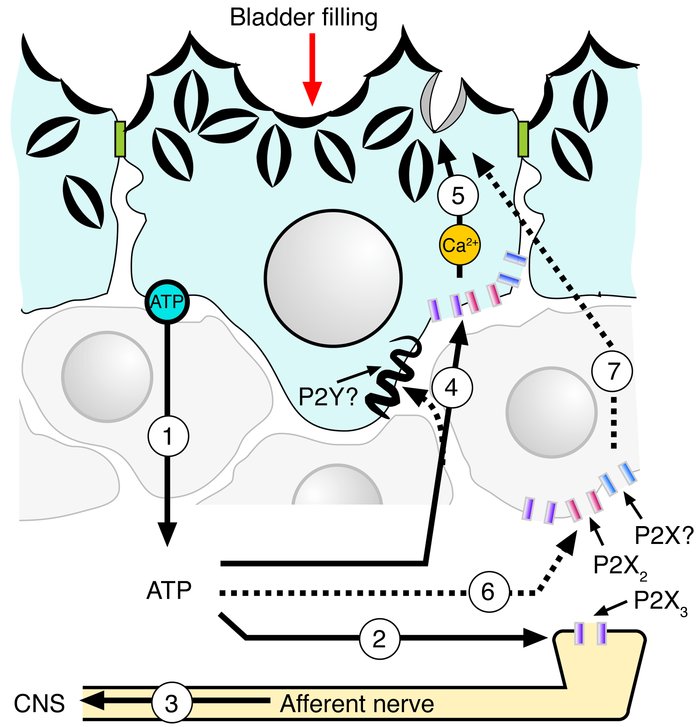 Model for ATP and purinergic receptor–regulated exocytosis/endocytosis in bladder umbrella cells. The accumulation of urine in the bladder increases hydrostatic pressure, stimulating release of ATP from uroepithelium (step 1) and possibly other adjacent cell types (not shown). ATP release may occur through multiple mechanisms, including vesicular release, conductance of ATP though ABC or nucleoside transporters, or movement of ATP across connexin hemichannels. The serosally released ATP may bind to P2X3-containing receptors present on afferent nerve processes (step 2), increasing nerve firing and relaying bladder filling to the CNS (step 3). Serosally released ATP may also bind to receptors containing P2X2 and/or P2X3 subunits present on the uroepithelium, including the basolateral surface of the umbrella cell layer (step 4). Other receptors, including P2X or P2Y receptor isoforms, are also present on the serosal surface of the epithelium and may also be stimulated by ATP (or other released or processed nucleotides/nucleosides). Ligand binding causes increased levels of cytoplasmic Ca2+ (a result of Ca2+ influx from outside the cell and efflux from intracellular stores) and activation of PKA that induces apical membrane turnover including discoidal/fusiform vesicle exocytosis and endocytosis (step 5). Although in the simplest model, ATP binds to purinergic receptors on the umbrella cell layer, it remains possible that ATP binds to purinergic receptors present on basal/intermediate cells (step 6), or other cell types, to signal the release of unidentified secretagogues that act upon umbrella cells to stimulate vesicle exocytosis (step 7). For simplicity, mucosal purinergic signaling events are not shown; however, these could be important in modulating the signaling pathways that initiate at the serosal surface of the umbrella cells.