CD4+CD25+ Tregs play a central role in the maintenance of peripheral self tolerance by keeping autoreactive T cells in check. Whereas the thymic origin of CD4+CD25+ Tregs, as a distinct lineage, has been inferred, understanding of their developmental pathways has remained elusive. In both mice and humans, peripheral CD4+CD25+ Treg populations have been described as composed of antigen-experienced T cells that fail to significantly proliferate following TCR stimulation but suppress proliferation and effector functions of CD25– T cells. Here we show that analysis of CD25 expression in human circulating CD4+ T lymphocytes with respect to their in vivo differentiation stages identifies a distinct subset of CD25+CCR7+CD62L+CTLA-4+FOXP3+ cells contained in the CD45RA+/RO– naive fraction. The subset, which we have named natural naive Tregs (NnTregs), is prominent in young adults and decreases with age together with the total naive CD4+ population. NnTregs are anergic following stimulation in the absence of IL-2 and exert ex vivo cell-cell contact–mediated suppressor functions. In addition, they proliferate in response to stimulation with autologous APCs, which indicates a high enrichment in T cells bearing self-reactive TCRs. The definition of this subset has important implications for the analysis of human naturally occurring Tregs and for their targeting in therapeutic immune interventions. 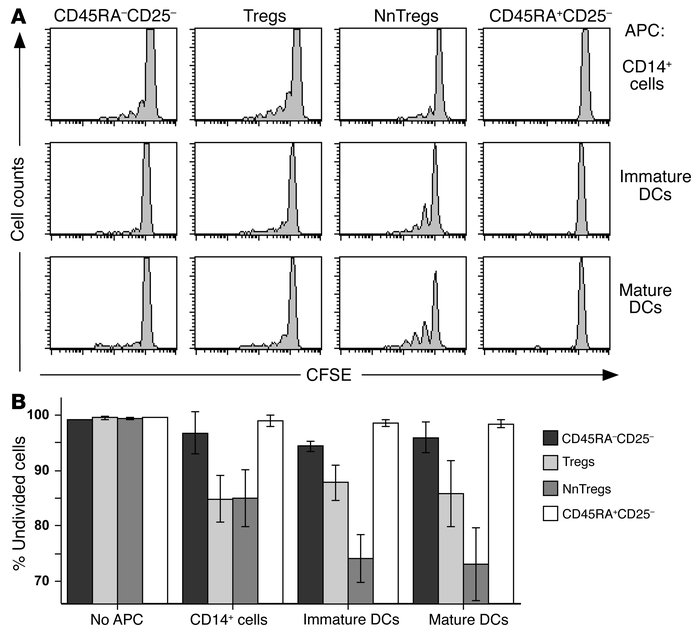