Short digits (Dsh) is a radiation-induced mouse mutant. Homozygous mice are characterized by multiple defects strongly resembling those resulting from Sonic hedgehog (Shh) inactivation. Heterozygous mice show a limb reduction phenotype with fusion and shortening of the proximal and middle phalanges in all digits, similar to human brachydactyly type A1, a condition caused by mutations in Indian hedgehog (IHH). We mapped Dsh to chromosome 5 in a region containing Shh and were able to demonstrate an inversion comprising 11.7 Mb. The distal breakpoint is 13.298 kb upstream of Shh, separating the coding sequence from several putative regulatory elements identified by interspecies comparison. The inversion results in almost complete downregulation of Shh expression during E9.5–E12.5, explaining the homozygous phenotype. At E13.5 and E14.5, however, Shh is upregulated in the phalangeal anlagen of Dsh/+ mice, at a time point and in a region where WT Shh is never expressed. The dysregulation of Shh expression causes the local upregulation of hedgehog target genes such as Gli1-3, patched, and Pthlh, as well as the downregulation of Ihh and Gdf5. This results in shortening of the digits through an arrest of chondrocyte differentiation and the disruption of joint development. 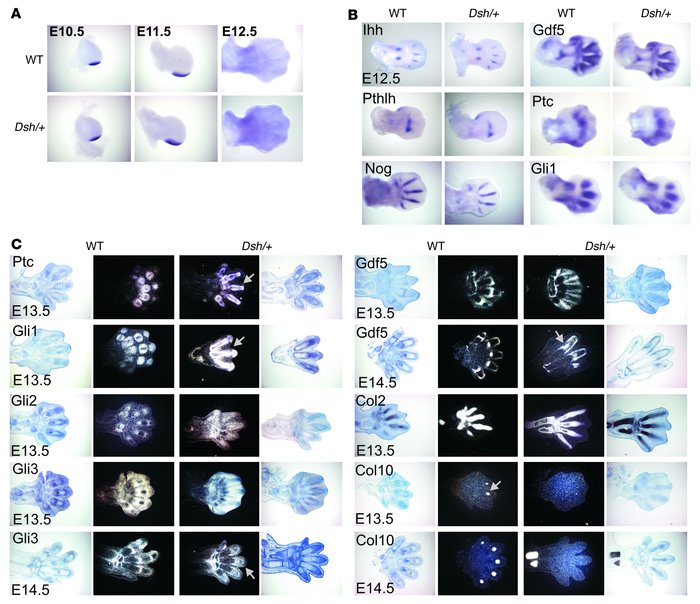 Developmental analysis of Dsh/+ limbs. Expression of marker genes relevant for digit development was performed using whole-mount ( and ) and section () in situ hybridization. () Expression of Shh in the posterior limb region and downregulation at E12.5 showing no difference between WT and Dsh/+. At E12.5 (), we find normal patterns of expression for all genes tested. At E13.5 and E14.5 (), the majority of genes show an abnormal pattern. Note misexpression of Hh receptor patched (ptc) and downstream effectors Gli1–Gli3 (arrows). Gdf5 first shows lack of expression in the developing joints (E13.5) and is then (E14.5) expressed in a more longitudinal fashion in the area of the future metacarpophalangeal joints (arrow). Col2a1 (Collagen type II a1; Col2) is expressed throughout the phalangeal anlagen but is less pronounced in the distal regions of Dsh/+ digits. Lack of Col10a1 (Collagen type X a1; Col10) expression in digit anlagen demonstrates delay in chondrocyte differentiation in Dsh/+. Magnification, ×50 (–).