Due to its relatively slow clinical progression, B cell chronic lymphocytic leukemia (B-CLL) is classically described as a disease of accumulation rather than proliferation. However, evidence for various forms of clonal evolution suggests that B-CLL clones may be more dynamic than previously assumed. We used a nonradioactive, stable isotopic labeling method to measure B-CLL cell kinetics in vivo. Nineteen patients drank an aliquot of deuterated water (2H2O) daily for 84 days, and 2H incorporation into the deoxyribose moiety of DNA of newly divided B-CLL cells was measured by gas chromatography/mass spectrometry, during and after the labeling period. Birth rates were calculated from the kinetic profiles. Death rates were defined as the difference between calculated birth and growth rates. These analyses demonstrated that the leukemic cells of each patient had definable and often substantial birth rates, varying from 0.1% to greater than 1.0% of the entire clone per day. Those patients with birth rates greater than 0.35% per day were much more likely to exhibit active or to develop progressive disease than those with lower birth rates Thus, B-CLL is not a static disease that results simply from accumulation of long-lived lymphocytes. Rather, it is a dynamic process composed also of cells that proliferate and die, often at appreciable levels. The extent to which this turnover occurs has not been previously appreciated. A correlation between birth rates and disease activity and progression appears to exist, which may help identify patients at risk for worsening disease in advance of clinical deterioration. 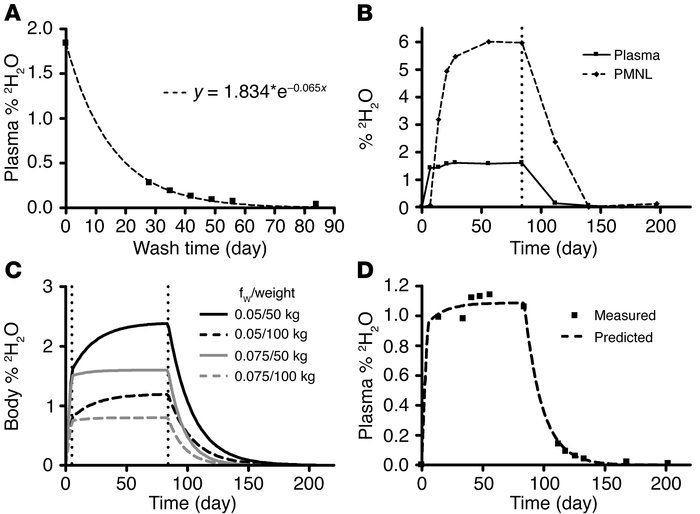 Modeling of the 2H2O levels in patients drinking 2H2O. () 2H2O enrichment data from the plasma of a CLL patient, showing that the dilution of 2H2O during the washout phase fits an exponential decay model. For the patient shown (CLL109), the equilibrium 2H2O enrichment was approximately 1.8% during the 2H2O intake period. Therefore, the daily water exchange rate, day, for this individual was approximately 2.3 l/d (2H2O intake of 60 ml/d × 70% 2H2O = 42 ml/d, divided by 0.018). The rate of the exponential decay is the fractional daily water exchange rate, w, and, for the patient shown, was 0.065 per day. The total body water was therefore 35.4 liters (2.3/0.065). This individual weighed 55 kg, so the fraction of body weight due to water was 0.64. This fraction was used for all patients in the study to estimate total body water when a patient’s weight was available. When a patient’s weight was not recorded, an w value of 6% per day was used. () Representative raw data for 2H2O enrichment in plasma and CD5+CD19+ cells from a B-CLL patient (CLL165). PMNL DNA saturates at a stable enrichment related to the 2H2O plasma enrichment. The vertical line at day 84 indicates the time at which the patient ceased intake of 2H2O. () Body 2H2O enrichment models for patients of various weights and fractional daily water exchange rates. Patients with high equilibrate faster, while patients with low can deviate substantially from a square pulse. () Body 2H2O enrichment model derived from a patient’s weight and equilibrium 2H2O enrichment accurately predicts the measured body 2H2O enrichment values.