Forkhead box O (Foxo) transcription factors are emerging as critical transcriptional integrators among pathways regulating differentiation, proliferation, and survival, yet the role of the distinct Foxo family members in angiogenic activity of endothelial cells and postnatal vessel formation has not been studied. Here, we show that Foxo1 and Foxo3a are the most abundant Foxo isoforms in mature endothelial cells and that overexpression of constitutively active Foxo1 or Foxo3a, but not Foxo4, significantly inhibits endothelial cell migration and tube formation in vitro. Silencing of either Foxo1 or Foxo3a gene expression led to a profound increase in the migratory and sprout-forming capacity of endothelial cells. Gene expression profiling showed that Foxo1 and Foxo3a specifically regulate a nonredundant but overlapping set of angiogenesis- and vascular remodeling–related genes. Whereas angiopoietin 2 (Ang2) was exclusively regulated by Foxo1, eNOS, which is essential for postnatal neovascularization, was regulated by Foxo1 and Foxo3a. Consistent with these findings, constitutively active Foxo1 and Foxo3a repressed eNOS protein expression and bound to the eNOS promoter. In vivo, Foxo3a deficiency increased eNOS expression and enhanced postnatal vessel formation and maturation. Thus, our data suggest an important role for Foxo transcription factors in the regulation of vessel formation in the adult. 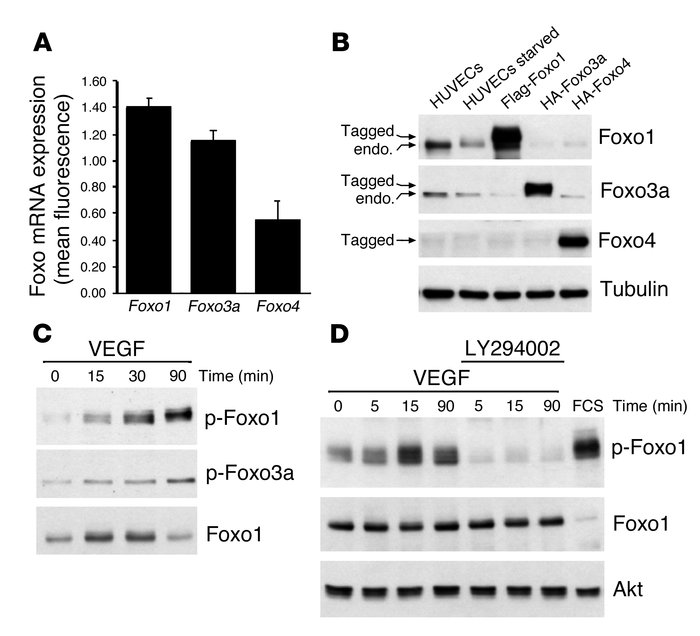 Foxo1 and Foxo3a are the predominant Foxo transcription factors in endothelial cells. () Statistical summary of the Foxo expression profile as assessed in a microarray analysis of total RNA isolated from HUVECs. Data are presented as mean ± SEM; = 4. The values on the axis represent a ratio normalized to the mean fluorescent intensity of all genes on the chip. () Cell fractions were prepared from HUVECs that were either left untreated, serum starved for 24 hours, or transfected with Flag-Foxo1, HA-Foxo3a, or HA-Foxo4 and subjected to SDS-PAGE. Western blot analysis was performed using the indicated antibodies. Tagged, epitope-tagged; endo., endogenous. () HUVECs were serum-starved for 24 hours and then either left untreated or stimulated with VEGF (50 ng/ml) for the indicated times. Cell lysates were subjected to Western blot analysis with antibodies against phospho-Foxo1 (Thr 24), phospho-Foxo3a (Thr 32), or total Foxo1. () HUVECs were serum starved for 24 hours, then incubated with 10 μM LY294002 for 1 hour and stimulated with VEGF (50 ng/ml) for the indicated times. Cell lysates were analyzed by Western blot analysis using an antibody directed against phospho-Foxo1. The total level of protein was assayed by Western blot analysis using an anti-Foxo1 and anti-Akt antibody. FCS (20%) was used as a positive control.