The population structure of Staphylococcus aureus carried by healthy humans was determined using a large strain collection of nonclinical origin (n = 829). High-throughput amplified fragment length polymorphism (AFLP) analysis revealed 3 major and 2 minor genetic clusters of S. aureus, which were corroborated by multilocus sequence typing. Major AFLP cluster I comprised 44.4% of the carriage isolates and showed additional heterogeneity whereas major AFLP groups II and III presented 2 homogeneous clusters, including 47.3% of all carriage isolates. Coanalysis of invasive S. aureus strains and epidemic methicillin-resistant S. aureus (MRSA) revealed that all major clusters contained invasive and multiresistant isolates. However, clusters and subclusters with overrepresentation of invasive isolates were also identified. Bacteremia in elderly adults, for instance, was caused by a IVa cluster–derived strain significantly more often than by strains from other AFLP clusters. Furthermore, expansion of multiresistant clones or clones associated with skin disease (impetigo) was detected, which suggests that epidemic potential is present in pathogenic strains of S. aureus. In addition, the virulence gene encoding Panton-Valentine leukocidin was significantly enriched in S. aureus strains causing abscesses and arthritis in comparison with the carriage group. We provide evidence that essentially any S. aureus genotype carried by humans can transform into a life-threatening human pathogen but that certain clones are more virulent than others. 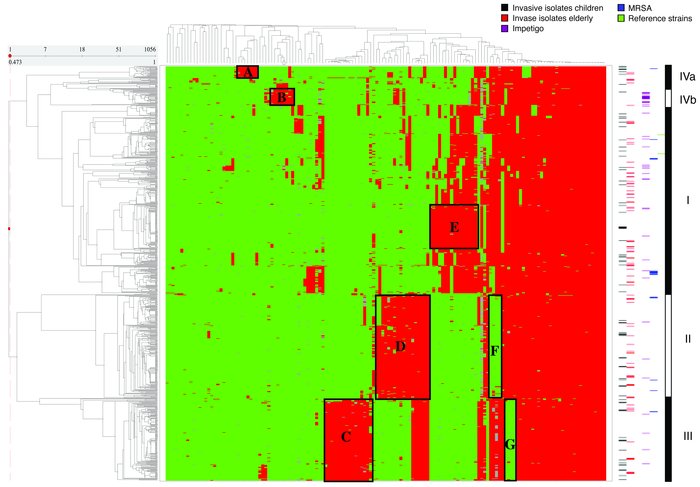 2D hierarchical clustering of the 1,056 strains. The green/red figure represents 155,232 binary outcomes generated by ht-AFLP with 147 marker fragments. Marker absence corresponds with green and marker presence with red. The dendrogram on the axis represents the phylogenetic clustering of the 1,056 strains. The dendrogram on the axis shows the clustering of the 147 AFLP markers, many of which segregate in specific groups. These groups are cluster specific, and some of these groups are shown as boxes in the figure (A through G). The colored, striped bars on the right represent the distribution of the invasive strains (children and elderly adults), the impetigo isolates, the MRSA strains, and the reference strains. The carriage strains ( = 829) are not pointed out separately. In conjunction with PCA 3 major (I, II, III) and 2 minor (IVa, IVb) branches were identified; these are represented by the black and white bar on the right of the figure.