The monomeric small GTPase Rab27a is specifically localized on both secretory granules and lysosome-related organelles. Although natural mutations of the Rab27a gene in human Griscelli syndrome and in ashen mice cause partial albinism and immunodeficiency reflecting the dysfunction of lysosome-related organelles, phenotypes resulting from the defective exocytosis of secretory granules have not been reported. To explore the roles of Rab27a in secretory granules, we analyzed insulin secretion profiles in ashen mice. Ashen mice showed glucose intolerance after a glucose load without signs of insulin resistance in peripheral tissues or insulin deficiency in the pancreas. Insulin secretion from isolated islets was decreased specifically in response to high glucose concentrations but not other nonphysiological secretagogues such as high K+ concentrations, forskolin, or phorbol ester. Neither the intracellular Ca2+ concentration nor the dynamics of fusion pore opening after glucose stimulation were altered. There were, however, marked reductions in the exocytosis from insulin granules predocked on the plasma membrane and in the replenishment of docked granules during glucose stimulation. These results provide the first genetic evidence to our knowledge for the role of Rab27a in the exocytosis of secretory granules and suggest that the Rab27a/effector system mediates glucose-specific signals for the exocytosis of insulin granules in pancreatic β cells. 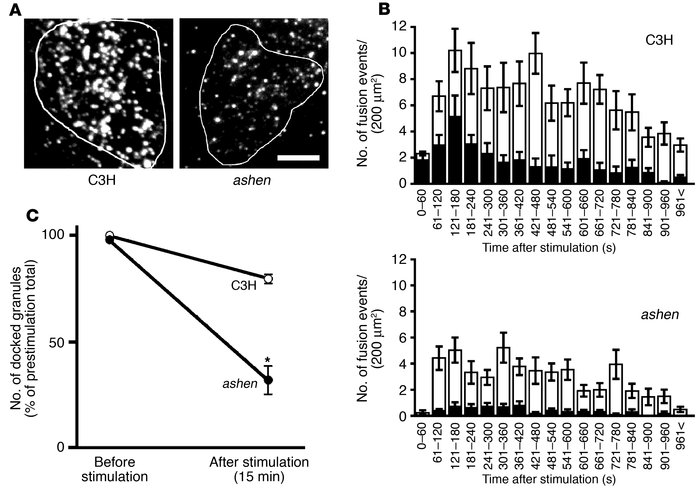 TIRFM analysis of the exocytosis of insulin granules. () Pancreatic β cells from either C3H/He (left) or (right) mice were fixed, immunostained with anti-insulin antibodies, and observed by TIRFM. The surrounding lines represent the outline of cells that are attached to the cover glass. Scale bar: 5 μm. () Pancreatic β cells of either C3H/He (upper) or (lower) mice were infected with adenoviruses encoding insulin-GFP. Evanescent images in live cells were acquired every 300 milliseconds after glucose stimulation. The fusion events per 200 μm2 were manually counted. The histograms show the number of fusion events at 60-second intervals after high-glucose (16.7 mM) stimulation. The black bars show the fusion from previously docked granules, whereas the white bars represent that from newly recruited granules. Values are mean ± SE ( = 24 for and = 21 for C3H/He mice). The statistical significance of differences between means were assessed by repeated-measures ANOVA. () The number of morphologically docked granules was counted on the TIRFM images of pancreatic β cells that had been infected with adenoviruses encoding insulin-GFP. The number after a glucose stimulation (16.7 mM, 15 minutes) was normalized to that prior to the stimulation in the identical area (200 μm2) of C3H/He (open circles) or (filled circles) β cells. Values are mean ± SE ( = 4). The statistical significance of differences between means was assessed by Student’s test. * < 0.0005 vs. C3H/He mice.