Can antibodies with specificity for soluble antigens mimic the therapeutic effects of intravenous IgG in the treatment of autoimmune disease?

Can antibodies with specificity for soluble antigens mimic the therapeutic effects of intravenous IgG in the treatment of autoimmune disease?

Intravenous Ig (IVIg) mediates protection from the effects of immune thrombocytopenic purpura (ITP) as well as numerous other autoimmune states; however, the active antibodies within IVIg are unknown. There is some evidence that antibodies specific for a cell-associated antigen on erythrocytes are responsible, at least in part, for the therapeutic effect of IVIg in ITP. Yet whether an IVIg directed to a soluble antigen can likewise be beneficial in ITP or other autoimmune diseases is also unknown. A murine model of ITP was used to determine the effectiveness of IgG specific to soluble antigens in treating immune thrombocytopenic purpura. Mice experimentally treated with soluble OVA + anti-OVA versus mice treated with OVA conjugated to rbcs (OVA-rbcs) + anti-OVA were compared. In both situations, mice were protected from ITP. Both these experimental therapeutic regimes acted in a complement-independent fashion and both also blocked reticuloendothelial function. In contrast to OVA-rbcs + anti-OVA, soluble OVA + anti-OVA (as well as IVIg) did not have any effect on thrombocytopenia in mice lacking the inhibitory receptor FcγRIIB (FcγRIIB–/– mice). Similarly, antibodies reactive with the endogenous soluble antigens albumin and transferrin also ameliorated ITP in an FcγRIIB-dependent manner. Finally, broadening the significance of these experiments was the finding that anti-albumin was protective in a K/BxN serum–induced arthritis model. We conclude that IgG antibodies directed to soluble antigens ameliorated 2 disparate IVIg-treatable autoimmune diseases. 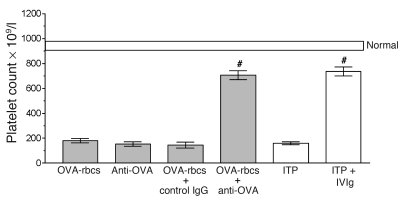