We investigated the molecular mechanism underlying a severe combined immunodeficiency characterized by the selective and complete absence of T cells. The condition was found in 5 patients and 2 fetuses from 3 consanguineous families. Linkage analysis performed on the 3 families revealed that the patients were carrying homozygous haplotypes within the 11q23 region, in which the genes encoding the γ, δ, and ε subunits of CD3 are located. Patients and affected fetuses from 2 families were homozygous for a mutation in the CD3D gene, and patients from the third family were homozygous for a mutation in the CD3E gene. The thymus from a CD3δ-deficient fetus was analyzed and revealed that T cell differentiation was blocked at entry into the double positive (CD4+CD8+) stage with the accumulation of intermediate CD4–single positive cells. This indicates that CD3δ plays an essential role in promoting progression of early thymocytes toward double-positive stage. Altogether, these findings extend the known molecular mechanisms underlying severe combined immunodeficiency to a new deficiency, i.e., CD3ε deficiency, and emphasize the essential roles played by the CD3ε and CD3δ subunits in human thymocyte development, since these subunits associate with both the pre-TCR and the TCR. 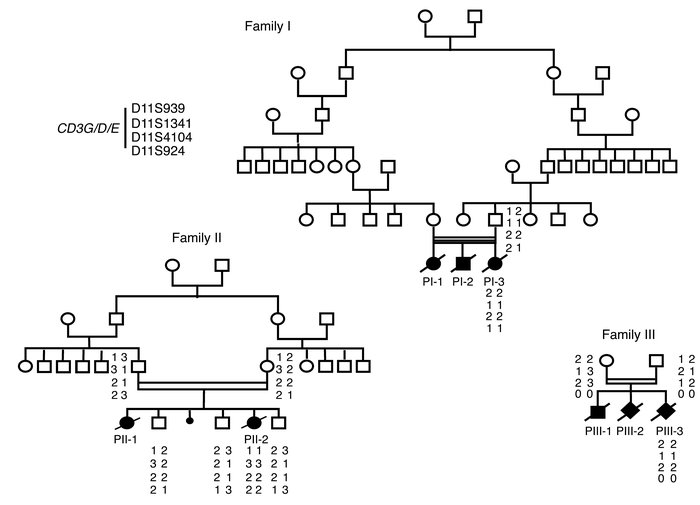