Kinetics of protective antibodies are determined by the viral surface antigen

Kinetics of protective antibodies are determined by the viral surface antigen

Delayed and weak virus neutralizing antibody (nAb) responses represent a hallmark correlating not only with the establishment of persistent infection but also with unsuccessful vaccine development. Using a reverse genetic approach, we evaluated possible underlying mechanisms in 2 widely studied viral infection models. Swapping the glycoproteins (GPs) of lymphocytic choriomeningitis virus (LCMV, naturally persisting, noncytolytic, inefficient nAb inducer) and vesicular stomatitis virus (VSV, nonpersisting, cytolytic, potent nAb inducer) transferred the only target of nAb’s from either virus to the other. We analyzed the nAb response to each of the 2 recombinant and parent viruses in infected mice and found that nAb kinetics were solely determined by the viral surface GP and not by the virus backbone. Moreover, the slowly and poorly nAb-triggering LCMV virion was a potent immunogenic matrix for the more antigenic VSV-GP. These findings indicate that the viral GP determines nAb kinetics largely independently of the specific viral infection context. They further suggest that structural features of viral GPs or coevolutionary adaptation of the virus’s GP to the host’s naive B cell repertoire, or both, may critically limit nAb kinetics and improvement of vaccine efficacy. 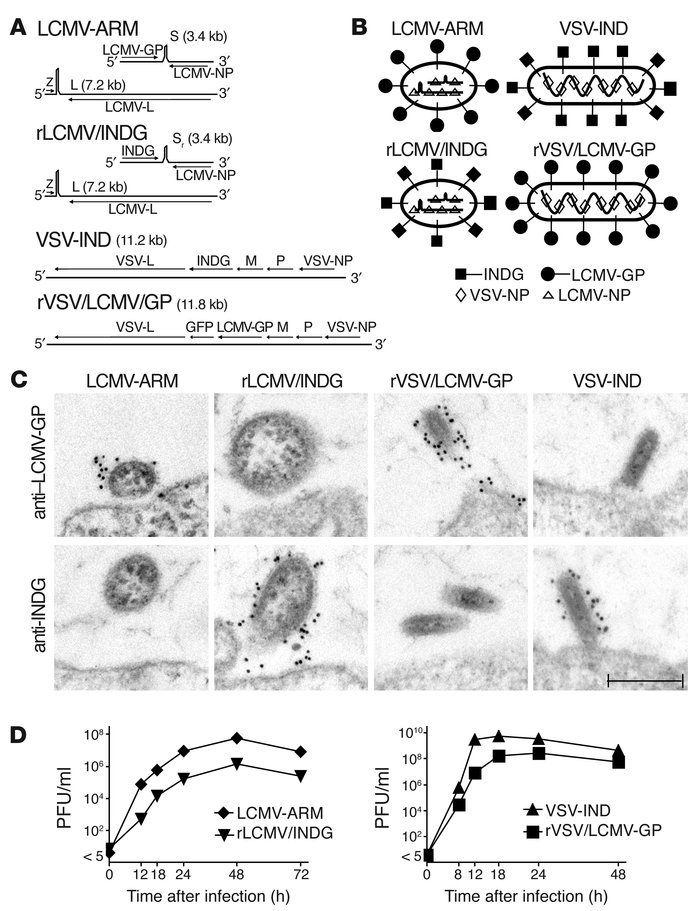 WT and recombinant viral genomes. () The LCMV-ARM genome consists of 2 single-stranded negative-strand ambisense RNA segments. The long (L) segment encodes for the LCMV RNA-dependent RNA polymerase (RdRp) L and for the matrix protein Z, while the short (S) segment carries the and genes. In rLCMV/INDG the gene of LCMV-ARM is substituted for (). The single-stranded negative-strand RNA genome of VSV-IND encodes in 3′-5′ orientation for NP, phosphoprotein (P), matrix protein (M), INDG, and L. L and P are associated in the VSV RdRp complex (). rVSV/LCMV-GP expresses GFP from an additional transcription unit between and . () Schematic describing the topology of GPs and NPs of the above viruses on the surface and inside infectious particles, respectively. () Immunogold staining of viral particles budding from BHK-21 cells infected with the viruses as indicated. The nAb’s of the indicated specificity were used for detection of the viral surface antigens. Scale bar: 0.2 μm. () BHK-21 cells were infected with the indicated viruses at a MOI of 0.01. Infectious virus in the supernatant was measured at the indicated time points. Symbols represent the mean of quadruplicate samples (SD within the size of the symbols).