α-Defensins are abundant antimicrobial peptides in polymorphonuclear leukocytes and play an important role in innate immunity. We have previously shown that α-defensin-1 can inhibit HIV-1 replication following viral entry. Here we examined the molecular mechanism(s) of α-defensin-1–mediated HIV-1 inhibition. α-Defensin-1 had a direct effect on HIV-1 virions at a low MOI in the absence of serum. The direct effect on HIV-1 virions was abolished by the presence of serum or an increase in virus particles. Studying the kinetics of the HIV life cycle revealed that α-defensin-1 inhibited steps following reverse transcription and integration. Analysis of PKC phosphorylation in primary CD4+ T cells in response to α-defensin-1 indicated that α-defensin-1 inhibited PKC activity. Pretreatment of infected CD4+ T cells with a PKC activator, bryostatin 1, partially reversed α-defensin-1–mediated HIV inhibition. Like α-defensin-1, the PKC isoform–selective inhibitor Go6976 blocked HIV-1 infection in a dose-dependent manner. Furthermore, kinetic studies and analysis of HIV-1 products indicated that α-defensin-1 and Go6976 blocked HIV-1 infection at similar stages in its life cycle, including nuclear import and transcription. Taken together, our studies demonstrate that, in the absence of serum, α-defensin-1 may act directly on the virus, but, in the presence of serum, its effects are on the cell, where it inhibits HIV-1 replication. At least 1 of the cellular effects associated with HIV inhibition is interference with PKC signaling in primary CD4+ T cells. Studying the complex function of α-defensin-1 in innate immunity against HIV has implications for prevention as well as therapeutics. 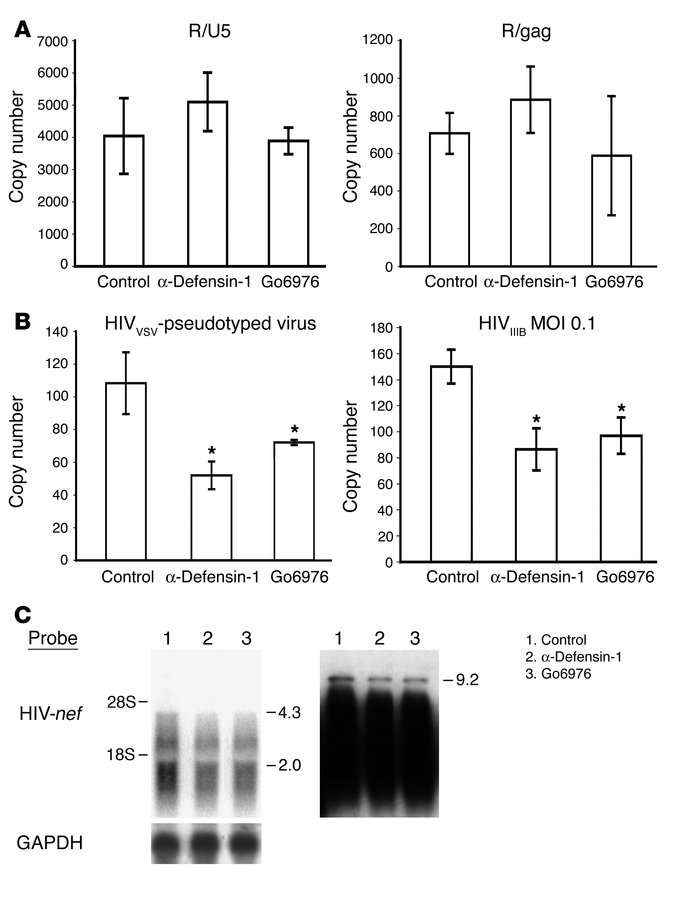 α-Defensin-1 and Go6976 inhibited HIV-1 infection at the steps of nuclear import and transcription. () CD4+ T cells were infected with HIV-1HxB2–pseudotyped viruses and then treated with α-defensin-1 or Go6976 for 48 hours. Quantitation of HIV-1 early strong-stop (R/U5) and late full-length (R/gag) reverse-transcribed products was performed. Data are mean ± SD of 3 independent experiments. No significant difference was observed between control (HIV-1–infected, no treatment) and α-defensin-1–treated cells, or between control and Go6976-treated cells, calculated by Student’s test ( > 0.05). () To assess whether α-defensin-1 or Go6976 suppressed HIV-1 nuclear import, real-time PCR analysis was performed to measure c2-LTR circles in CD4+ T cells infected with replication-defective HIV-1VSV–pseudotyped virus (left panel) or replication-competent HIVIIIB at MOI 0.1 (right panel) upon treatment with inhibitors at 2 hours after infection. Samples were prepared at 24 h after infection, and c2-LTR circles were measured. * < 0.05, control (HIV-1–infected, no treatment) vs. α-defensin-1–treated, control vs. Go6976-treated, calculated by Student’s test. Data represent 2 independent experiments. () To determine whether α-defensin-1 or Go6976 inhibited HIV transcription, primary CD4+ T cells were infected with HIVIIIB at MOI 0.05 for 2 hours. Cells were washed and treated with Nelfinavir at 20 μM for 48 hours before exposure to inhibitors for 3 additional days. Total RNA was analyzed by Northern blot analysis using 32P-labeled HIV- DNA fragment. Longer exposure of the blot is shown in the right panel. The blot was stripped and then probed with GAPDH as a control.