Since cAMP blocks meiotic maturation of mammalian and amphibian oocytes in vitro and cyclic nucleotide phosphodiesterase 3A (PDE3A) is primarily responsible for oocyte cAMP hydrolysis, we generated PDE3A-deficient mice by homologous recombination. The Pde3a–/– females were viable and ovulated a normal number of oocytes but were completely infertile, because ovulated oocytes were arrested at the germinal vesicle stage and, therefore, could not be fertilized. Pde3a–/– oocytes lacked cAMP-specific PDE activity, contained increased cAMP levels, and failed to undergo spontaneous maturation in vitro (up to 48 hours). Meiotic maturation in Pde3a–/– oocytes was restored by inhibiting protein kinase A (PKA) with adenosine-3′,5′-cyclic monophosphorothioate, Rp-isomer (Rp-cAMPS) or by injection of protein kinase inhibitor peptide (PKI) or mRNA coding for phosphatase CDC25, which confirms that increased cAMP-PKA signaling is responsible for the meiotic blockade. Pde3a–/– oocytes that underwent germinal vesicle breakdown showed activation of MPF and MAPK, completed the first meiotic division extruding a polar body, and became competent for fertilization by spermatozoa. We believe that these findings provide the first genetic evidence indicating that resumption of meiosis in vivo and in vitro requires PDE3A activity. Pde3a–/– mice represent an in vivo model where meiotic maturation and ovulation are dissociated, which underscores inhibition of oocyte maturation as a potential strategy for contraception. 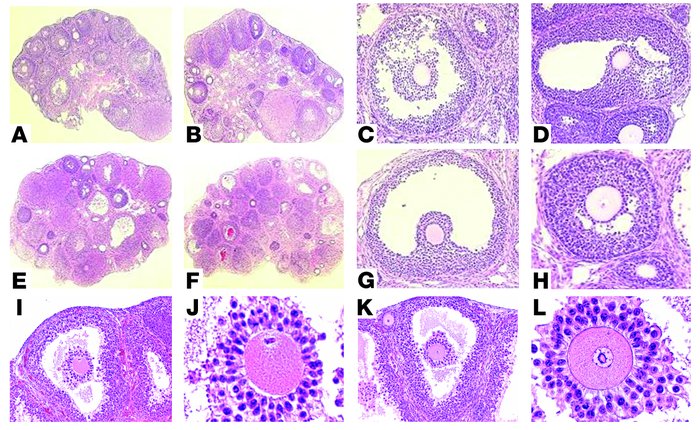 Histology of ovaries from and mice. (–) H&E sections of ovaries harvested from C57BL/6J-129/SvJ females (3 months old), ( and ) or ( and ), or from females (5 weeks old) after induction of superovulation as described in Methods, ( and ) or ( and ). Magnification, , , , and : ×4; , , , and : ×20. females exhibited normal ovaries and follicles, either in normal condition or following superovulation. (–) or females were injected with PMSG and hCG as described in Methods; 9 hours after injection with hCG, H&E sections were prepared. Note the expanded cumulus, which has lost contact with the follicle wall in both genotypes. Whereas the oocytes are in metaphase (with an evident spindle) ( and ), the immature oocytes exhibit an intact nuclear membrane (GV stage) ( and ).