Melanoma is the most lethal skin cancer. Most deaths from melanoma result from metastases. Semaphorins have been shown to inhibit neuronal and endothelial cell migration, but the effects of semaphorins on tumor metastasis have not been documented. We found that semaphorin 3F (SEMA3F) was markedly downregulated in highly metastatic human cell lines in vitro and in vivo, which suggested that it may be a metastasis inhibitor. Metastatic human melanoma cells were transfected with SEMA3F and implanted into mice; the resultant tumors did not metastasize. Rather, the primary tumors resembled benign nevi characterized by large areas of apoptosis, diminished vascularity, inhibition of hyperplasia in overlying epidermal cells, and encapsulated tumor borders delineated by thick layers of fibroblasts and collagen matrix. This phenotype is in stark contrast to highly invasive, vascular mock-transfected tumors. In vitro, tumor cells expressing SEMA3F had a diminished capacity to adhere and migrate on fibronectin. Consistent with semaphorin-mediated chemorepulsion of neurons, tumor cells expressing SEMA3F were chemorepulsive for vascular and lymphatic endothelial cells expressing neuropilin-2 (NRP2), a novel mechanism for a tumor angiogenesis inhibitor. The repulsive activity was abrogated by NRP2 RNA interference. Together these results indicate that SEMA3F is a potent metastasis inhibitor that targets both tumor and stromal cells and raise the possibility of SEMA3F having therapeutic potential. 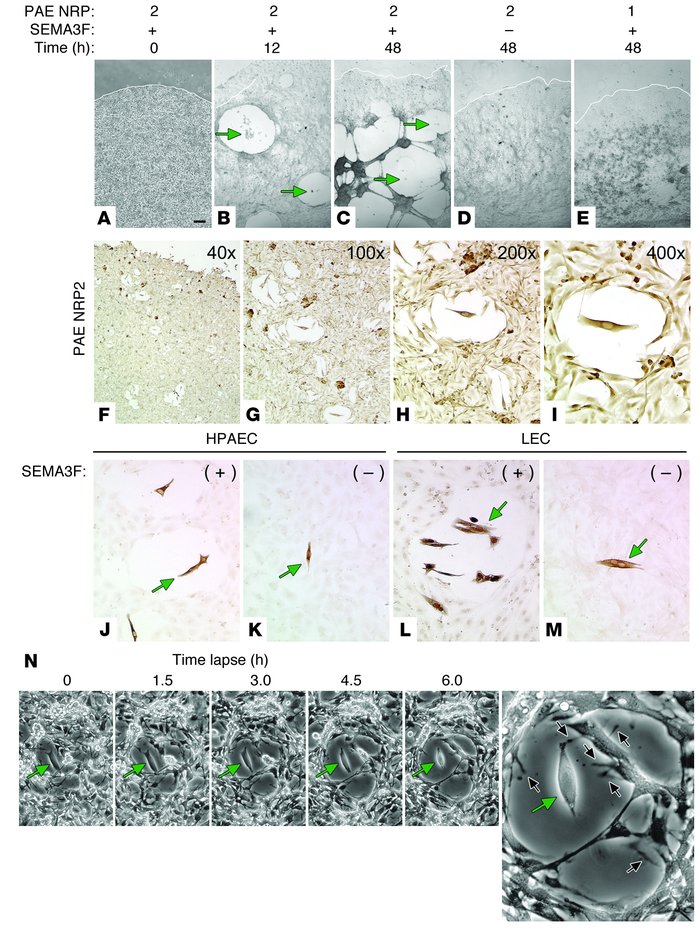 SEMA3F-induced EC chemorepulsion. (–) PAE NRP2 (–) or PAE NRP1 cells () were cultured to confluence. At time 0, SM/SEMA3F cells were added into the culture (). EC retraction was apparent at 12 hours () and was even more dramatic at 48 hours (). Green arrows point to the SM/SEMA3F cells at the center of the clearance zones. No clearance zone was observed when SM cells lacking SEMA3F were added () or when PAE NRP1 cells were used (). Scale bar: 200 μm. (–) The repulsion of PAE NRP2 cells by SM/SEMA3F cells (brown color due to melanoma marker S100β staining) at 9 hours of coculture is shown at various magnifications – 40× (), 100× (), 200× (), and 400× () – to demonstrate the large number of clearance zones observable at low magnification and the clearance zone induced by 1 individual SM/SEMA3F cell at high magnification. (–) The repulsion of primary ECs. HPAECs () and LECs () are repelled from SM/SEMA3F cells, but HPAECs () and LECs () are not repelled from control SM/Mock cells. Representative tumor cells are denoted by green arrows. Scale bars: 100 μm. () Time-lapse photography and video (see supplemental data) of the interaction of SM/SEMA3F and PAE NRP2 cells. The central tumor cell (green arrow) is expressing SEMA3F, and the surrounding cells are PAE cells expressing NRP2. Notice the ECs moving away from the source of SEMA3F over time, creating a clearance zone. In the video and in a higher-magnification view (right panel), the ECs can be seen to extend and retract numerous filopodia (black arrows) as they sense their environment.