Obesity is associated with a state of chronic, low-grade inflammation. Two manuscripts in this issue of the JCI (see the related articles beginning on pages 1796 and 1821) now report that obese adipose tissue is characterized by macrophage infiltration and that these macrophages are an important source of inflammation in this tissue. These studies prompt consideration of new models to include a major role for macrophages in the molecular changes that occur in adipose tissue in obesity. 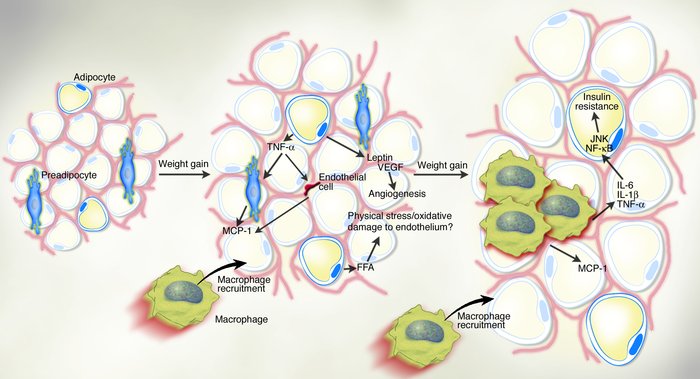 Obese adipose tissue is characterized by inflammation () and progressive infiltration by macrophages as obesity develops (, ). Changes in adipocyte and fat pad size lead to physical changes in the surrounding area and modifications of the paracrine function of the adipocyte. For example, in obesity, adipocytes begin to secrete low levels of TNF-α, which can stimulate preadipocytes to produce monocyte chemoattractant protein-1 (MCP-1) (). Similarly, endothelial cells also secrete MCP-1 in response to cytokines. Thus, either preadipocytes or endothelial cells supports the idea that it is produced initially by cells other than macrophages (). Increased secretion of leptin (and/or decreased production of adiponectin) by adipocytes may also contribute to macrophage accumulation by stimulating transport of macrophages to adipose tissue () and promoting adhesion of macrophages to endothelial cells, respectively (). It is conceivable, also, that physical damage to the endothelium, caused either by sheer size changes and crowding or oxidative damage resulting from an increasingly lipolytic environment, could also play a role in macrophage recruitment, similar to that seen in atherosclerosis. Whatever the initial stimulus to recruit macrophages into adipose tissue is, once these cells are present and active, they, along with adipocytes and other cell types, could perpetuate a vicious cycle of macrophage recruitment, production of inflammatory cytokines, and impairment of adipocyte function.