Defects in secretion, aggregation, and thrombus formation in platelets from mice lacking Akt2

Defects in secretion, aggregation, and thrombus formation in platelets from mice lacking Akt2

Prior studies have shown that PI3Ks play a necessary but incompletely defined role in platelet activation. One potential effector for PI3K is the serine/threonine kinase, Akt, whose contribution to platelet activation was explored here. Two isoforms of Akt were detected in mouse platelets, with expression of Akt2 being greater than Akt1. Deletion of the gene encoding Akt2 impaired platelet aggregation, fibrinogen binding, and granule secretion, especially in response to low concentrations of agonists that activate the Gq-coupled receptors for thrombin and thromboxane A2. Loss of Akt2 also impaired arterial thrombus formation and stability in vivo, despite having little effect on platelet responses to collagen and ADP. In contrast, reducing Akt1 expression had no effect except when Akt2 was also deleted. Activation of Akt by thrombin was abolished by deletion of Gαq but was relatively unaffected by deletion of Gαi2, which abolished Akt activation by ADP. From these results we conclude that Akt2 is a necessary component of PI3K-dependent signaling downstream of Gq-coupled receptors, promoting thrombus growth and stability in part by supporting secretion. The contribution of Akt1 is less evident except in the setting in which Akt2 is absent. 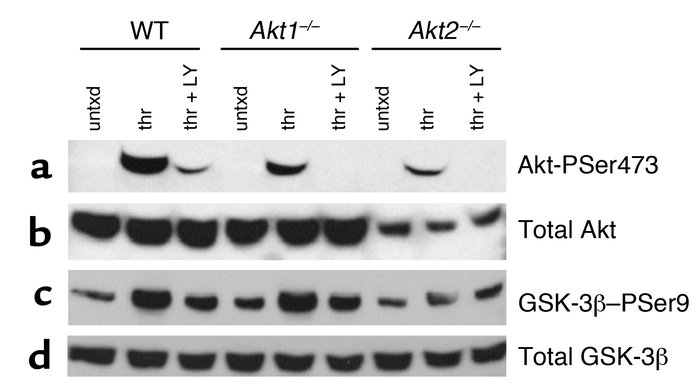