Today, dilated cardiomyopathy (DCM) represents the main cause of severe heart failure and disability in younger adults and thus is a challenge for public health. About 30% of DCM cases are genetic in origin; however, the large majority of cases are sporadic, and a viral or immune pathogenesis is suspected. Following the established postulates for pathogenesis of autoimmune diseases, here we provide direct evidence that an autoimmune attack directed against the cardiac β1-adrenergic receptor may play a causal role in DCM. First, we immunized inbred rats against the second extracellular β1-receptor loop (β1-ECII; 100% sequence identity between human and rat) every month. All these rats developed first, receptor-stimulating anti–β1-ECII Ab’s and then, after 9 months, progressive severe left ventricular dilatation and dysfunction. Second, we transferred sera from anti–β1-ECII–positive and Ab-negative animals every month to healthy rats of the same strain. Strikingly, all anti–β1-ECII–transferred rats also developed a similar cardiomyopathic phenotype within a similar time frame, underlining the pathogenic potential of these receptor Ab’s. As a consequence, β1-adrenergic receptor–targeted autoimmune DCM should now be categorized with other known receptor Ab-mediated autoimmune diseases, such as Graves disease or myasthenia gravis. Although carried out in an experimental animal model, our findings should further encourage the development of therapeutic strategies that combat harmful anti–β1-ECII in receptor Ab–positive DCM patients. 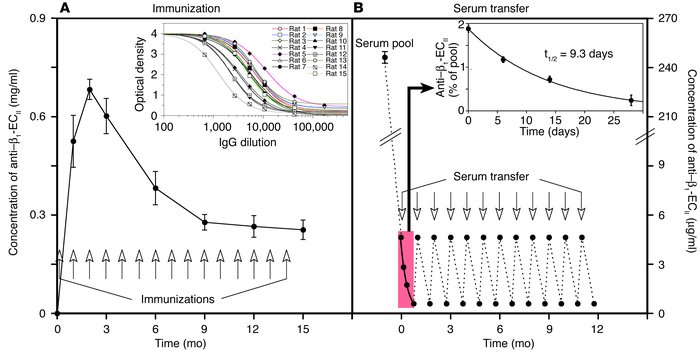 Study protocol and anti–β1-AR Ab’s. () The plotted curve indicates mean titers plus or minus SEM (error bars) of specific rat anti–β1-ECII (IgG subclass) during the immunization experiment. Time points of subcutaneous immunizations are indicated by arrows. The inset depicts the immunoreactivities of IgG prepared from all 15 β1-ECII–injected rats 3 months after the first immunization determined by ELISA. () Scheme depicting concentrations of rat anti–β1-ECII (serum pool and transferred amounts) during the transfer experiment. Time points of intravenous serum transfer are indicated by arrows. The inset shows representative mean titers plus or minus SEM after transfer of 0.7 ∝g anti–β1-ECII/g BW over a 4-week period and the derived half-life for rat anti–β1-ECII.