A protective role for antibodies has not previously been described for host defense against the pathogenic fungus Histoplasma capsulatum (Hc). Mouse mAb’s were generated from mice immunized with Hc yeast that binds the cell surface of Hc. Administration of mAb’s before Hc infection reduced fungal burden, decreased pulmonary inflammation, and prolonged survival in a murine infection model. Protection mediated by mAb’s was associated with enhanced levels of IL-4, IL-6, and IFN-γ in the lungs of infected mice. The mAb’s increased phagocytosis of yeast by J774.16 cells through a CR3-dependent process. Ingestion of mAb-opsonized Hc by J774.16 macrophage-like cells was associated with yeast cell growth inhibition and killing. The mAb’s bound to a 17-kDa antigen expressed on the surface of Hc. The antigen was identified as a histone H2B–like protein. This study establishes that mAb’s to a cell surface protein of Hc alter the intracellular fate of the fungus and mediate protection in a murine model of lethal histoplasmosis, and it suggests a new candidate antigen for vaccine development. 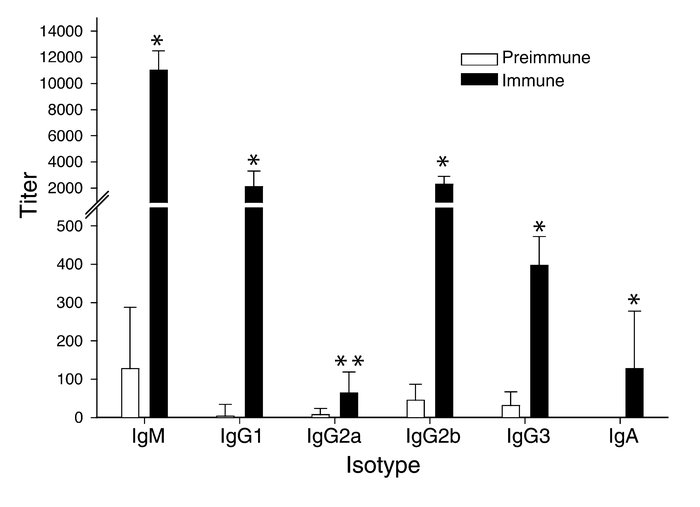 Whole-yeast-cell ELISA demonstrating the serological response to immunization with intact heat-killed . Preimmune serum was obtained prior to immunization. The hyperimmune serum was taken 2 weeks after the fourth immunization. The sera were serially diluted in blocking solution. For comparison of preimmune and immune sera for each isotype, * < 0.01 and ** = 0.018 by Student’s test. The results were from the mouse with the strongest immune response, but results were similar in all mice.