To determine the role of CD154-CD40 interactions in the B cell overactivity exhibited by patients with active systemic lupus erythematosus (SLE), CD19+ peripheral B cells were examined before and after treatment with humanized anti-CD154 mAb (BG9588, 5c8). Before treatment, SLE patients manifested activated B cells that expressed CD154, CD69, CD38, CD5, and CD27. Cells expressing CD38, CD5, or CD27 disappeared from the periphery during treatment with anti-CD154 mAb, and cells expressing CD69 and CD154 disappeared from the periphery during the post-treatment period. Before treatment, active-SLE patients had circulating CD38bright Ig-secreting cells that were not found in normal individuals. Disappearance of this plasma cell subset during treatment was associated with decreases in anti–double-stranded DNA (anti-dsDNA) Ab levels, proteinuria, and SLE disease activity index. Consistent with this finding, peripheral B cells cultured in vitro spontaneously proliferated and secreted Ig in a manner that was inhibited by anti-CD154 mAb. Finally, the CD38+/++IgD+, CD38+++, and CD38+IgD– B cell subsets present in the peripheral blood also disappeared following treatment with humanized anti-CD154. Together, these results indicate that patients with active lupus nephritis exhibit abnormalities in the peripheral B cell compartment that are consistent with intensive germinal center activity, are driven via CD154-CD40 interactions, and may reflect or contribute to the propensity of these patients to produce autoantibodies. 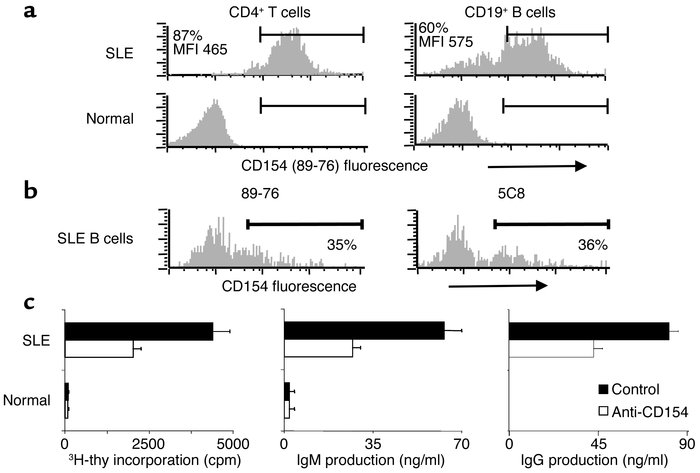 Freshly isolated SLE B cells express functionally active CD154. ( and ) CD154 expression on CD4+ T cells and CD19+ B cells from the periphery of SLE patients and normal volunteers was assessed by flow cytometric staining of PBMCs for CD154 (PE-conjugated 89-76; shown in and in [left panel]; unconjugated 5c8 followed by PE-conjugated goat anti-mouse Ig, [right panel]) and CD19 or CD4 (APC-conjugated mAb, and ). The results of two of six experiments with similar findings are shown. () Freshly isolated, negatively selected peripheral B cells (0.1 × 105) from active-SLE patients and normal volunteers were incubated in the presence of 10 μg/ml anti-CD154 (mIgG2a; 5c8) or 10 μg/ml control Ab (mouse IgG2a; P1.17). Analysis of DNA synthesis was carried out on day 3. Ig production was analyzed by ELISA after a 5-day incubation. All determinations were performed in duplicate and are expressed as the mean ± SEM. The results of one of three experiments with similar findings are shown. 3H-thy, 3H-thymidine.