CNS-resident cells, in particular microglia and macrophages, are a source of inflammatory cytokines during inflammation within the CNS. Expression of IL-23, a recently discovered cytokine, has been shown to be critical for the development of experimental autoimmune encephalomyelitis (EAE) in mice. Expression of the p40 subunit of IL-12 and IL-23 by microglia has been shown in situ and in vitro, but direct evidence for a functional significance of p40 expression by CNS cells during an immune response in vivo is still lacking. Here we report that p40 plays a critical role in maintaining encephalitogenicity during the disease course. By using irradiation bone marrow chimeras, we have generated mice in which p40 is deleted from the CNS parenchyma but not the systemic immune compartment. Our studies show that p40 expressed by CNS-endogenous cells is critical for the development of myelin oligodendrocyte glycoprotein–induced EAE. In spite of the reduced clinical disease, the absence of p40 from the CNS has little impact on the degree of inflammation. Expression profiles of the CNS lesions show an increase in Th2 cytokines when compared with mice that develop EAE in the presence of CNS IL-12 and/or IL-23. Taken together, our data demonstrate that p40 expression by CNS-resident cells forms the basis for the Th1 bias of the CNS. 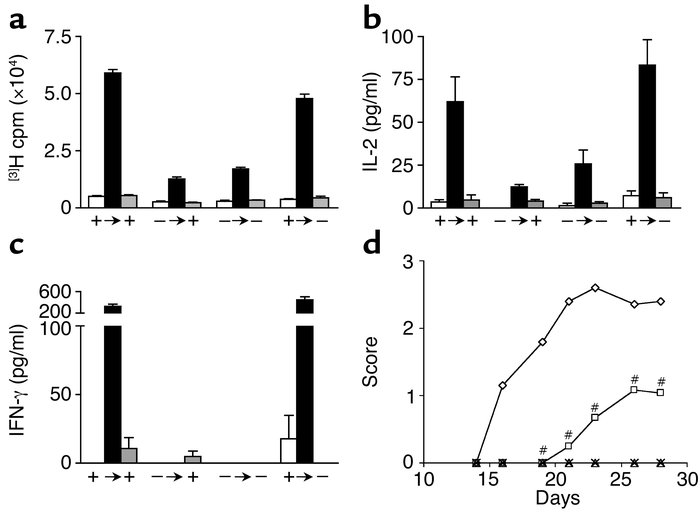 BM transfer fully reconstitutes the host’s ability to drive Th1 immunity. After 2 months of recovery, BM chimeric mice were immunized with MOG peptide in CFA and lymph nodes were removed 5 days later. Recall proliferation (), IL-2 (), and IFN-γ secretion () in response to either 100 μg MOG peptide or irrelevant myelin proteolipid protein peptide was assessed in vitro. White bars, medium alone; black bars, 100 μg MOG peptide; gray bars, 100 μg PLP peptide. +, WT; –, ; arrows indicates the transfer of BM. () After BM transplant, mice (diamonds, → ; squares, → ; ×, → ; triangles, → ) were allowed to recover for 2 months, then immunized with MOG35–55 in CFA as described and scored for clinical disease. In all experiments, the disease score between the susceptible → and → mice was significantly different as assessed using a nonpaired Student’s test (# < 0.01). Shown is a representative of four individual experiments.