Sepsis is a common, life-threatening disease for which there is little treatment. The cysteine protease dipeptidyl peptidase I (DPPI) activates granule-associated serine proteases, several of which play important roles in host responses to bacterial infection. To examine DPPI’s role in sepsis, we compared DPPI–/– and DPPI+/+ mice using the cecal ligation and puncture (CLP) model of septic peritonitis, finding that DPPI–/– mice are far more likely to survive sepsis. Outcomes of CLP in mice lacking mast cell DPPI reveal that the absence of DPPI in mast cells, rather than in other cell types, is responsible for the survival advantage. Among several cytokines surveyed in peritoneal fluid and serum, IL-6 is highly and differentially expressed in DPPI–/– mice compared with DPPI+/+ mice. Remarkably, deleting IL-6 expression in DPPI–/– mice eliminates the survival advantage. The increase in IL-6 in septic DPPI–/– mice, which appears to protect these mice from death, may be related to reduced DPPI-mediated activation of mast cell tryptase and other peptidases, which we show cleave IL-6 in vitro. These results indicate that mast cell DPPI harms the septic host and that DPPI is a novel potential therapeutic target for treatment of sepsis. 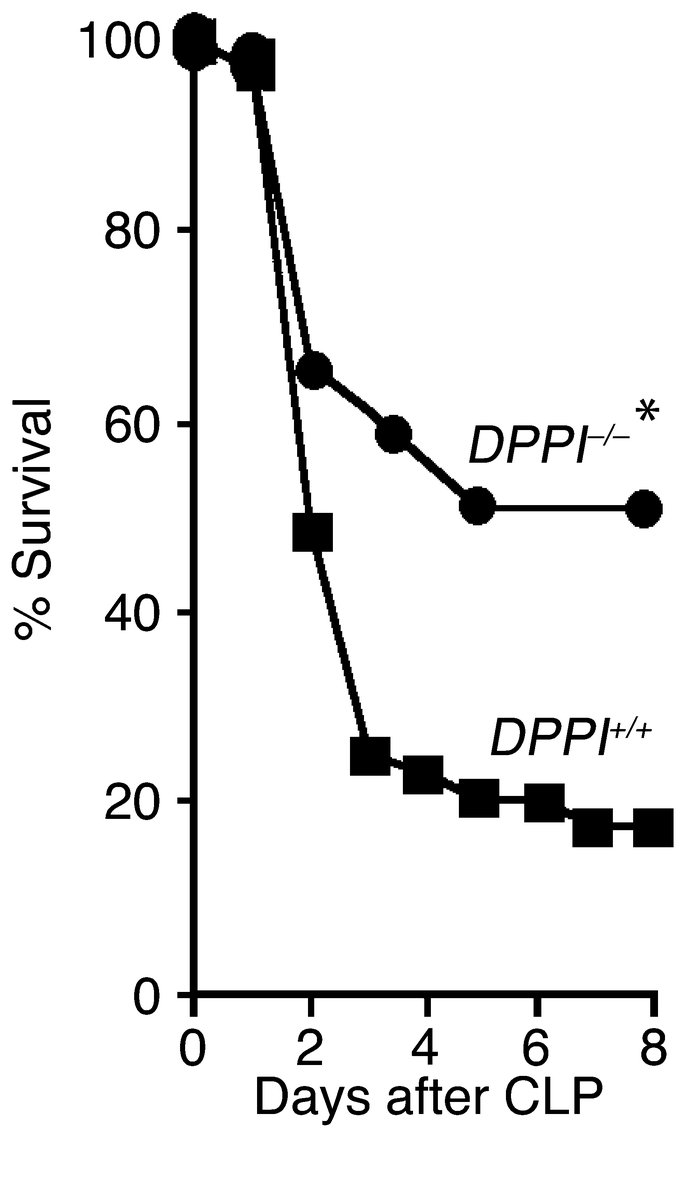 DPPI–/–mice are protected from death from septic peritonitis. (39 mice) and (41 mice) mice were subjected to CLP (50% ligation and single puncture with an 18-gauge needle), and survival was monitored for 8 days. Note the markedly improved survival of mice. * = 0.001.