The TGF-β signaling network plays a complex role in carcinogenesis because it has the potential to act as either a tumor suppressor or a pro-oncogenic pathway. Currently, it is not known whether TGF-β can switch from tumor suppressor to pro-oncogenic factor during the course of carcinogenic progression in a single cell lineage with a defined initiating oncogenic event or whether the specific nature of the response is determined by cell type and molecular etiology. To address this question, we have introduced a dominant negative type II TGF-β receptor into a series of genetically related human breast–derived cell lines representing different stages in the progression process. We show that decreased TGF-β responsiveness alone cannot initiate tumorigenesis but that it can cooperate with an initiating oncogenic lesion to make a premalignant breast cell tumorigenic and a low-grade tumorigenic cell line histologically and proliferatively more aggressive. In a high-grade tumorigenic cell line, however, reduced TGF-β responsiveness has no effect on primary tumorigenesis but significantly decreases metastasis. Our results demonstrate a causal role for loss of TGF-β responsiveness in promoting breast cancer progression up to the stage of advanced, histologically aggressive, but nonmetastatic disease and suggest that at that point TGF-β switches from tumor suppressor to prometastatic factor. 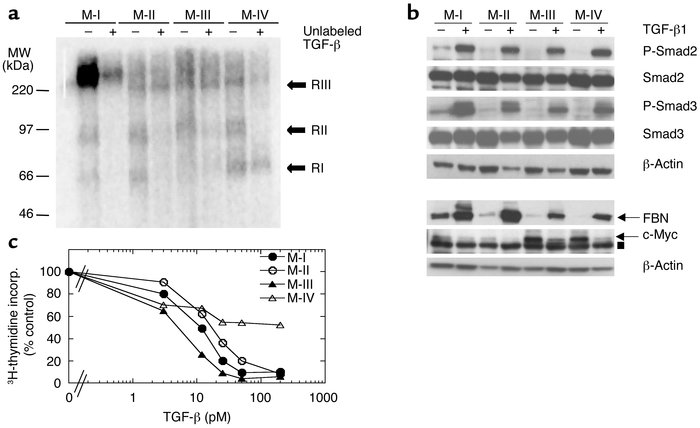 TGF-β receptor expression and responsiveness in the four human breast epithelial cell lines. () Ligand affinity cross-linking Cell lines were affinity labeled with 100 pM 125I-labeled TGF-β1 in the absence (–) or presence (+) of a 50-fold molar excess of unlabeled TGF-β1. The migration positions of the endogenous TGF-β receptors (RI, RII, and RIII) are indicated. MW, molecular weight. () Smad phosphorylation and regulation of gene expression. Cells were treated with 2 ng/ml TGF-β and assessed by Western blot analysis for extent of Smad phosphorylation (at =15 minutes), and effects on fibronectin (FBN) and c-Myc expression (at = 24 hours). For the c-Myc blot, the arrow indicates the c-Myc band and the filled square indicates a nonspecific band. () Growth-inhibitory effects of TGF-β1. Cell proliferation in the presence of increasing amounts of TGF-β1 was quantitated by 3H-thymidine incorporation (incorp.). Results are the means for three determinations normalized to the controls with no added TGF-β for each cell type.