Guanylin and uroguanylin, peptides synthesized in the intestine and kidney, have been postulated to have both paracrine and endocrine functions, forming a potential enteric-renal link to coordinate salt ingestion with natriuresis. To explore the in vivo role of uroguanylin in the regulation of sodium excretion, we created gene-targeted mice in which uroguanylin gene expression had been ablated. Northern and Western analysis confirmed the absence of uroguanylin message and protein in knockout mice, and cGMP levels were decreased in the mucosa of the small intestine. Ussing chamber analysis of jejunum revealed that Na+/H+ exchanger–mediated Na+ absorption and tissue conductance was not altered in the knockout animals, but short-circuit current, an index of electrogenic anion secretion, was reduced. Renal clearance measurements showed that uroguanylin deficiency results in impaired ability to excrete an enteral load of NaCl, primarily due to an inappropriate increase in renal Na+ reabsorption. Finally, telemetric recordings of blood pressure demonstrated increased mean arterial pressure in uroguanylin knockout animals that was independent of the level of dietary salt intake. Together, these findings establish a role for uroguanylin in an enteric-renal communication axis as well as a fundamental principle of this axis in the maintenance of salt homeostasis in vivo. 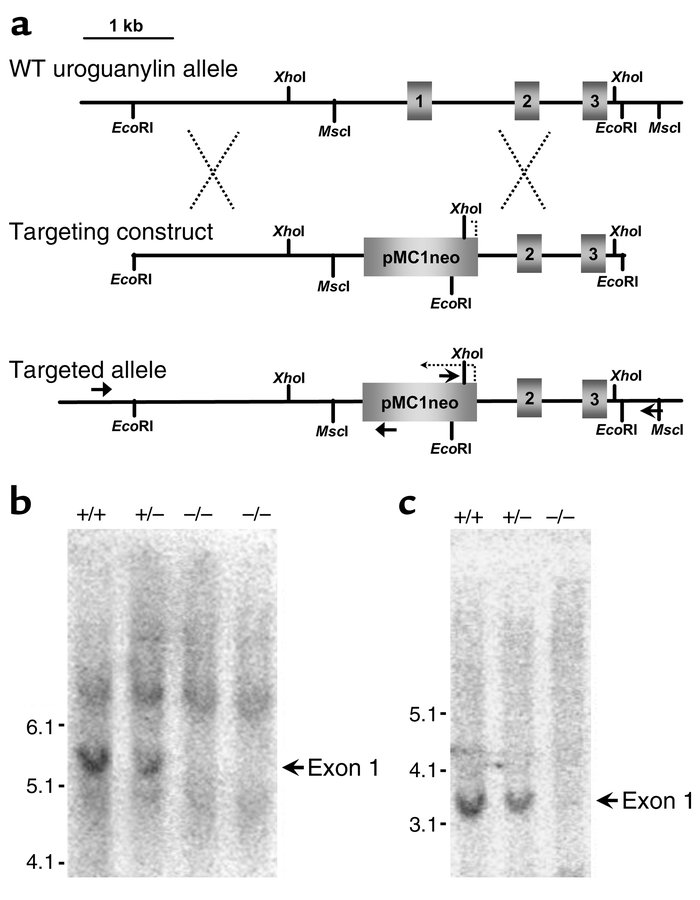 () Targeting scheme used to disrupt the uroguanylin locus. Recombination between the targeting vector and the WT allele produced the targeted allele where 140 bp of the promoter and 807 bp of the uroguanylin gene including exon 1 are replaced by a PMC1neo polyA+ cassette. The arrow above the neo cassette indicates the direction of transcription. The two pairs of arrows represent the approximate locations of PCR primers used to identify targeted ES cell clones. Separate primer pairs were used for PCR genotype as indicated in the text. () Southern blot of genomic DNA digested with RI; () Southern blot digested with I. These blots were probed with a 405-bp fragment containing genomic DNA from exon 1, representing base pairs +60 to +465 of the mouse uroguanylin coding sequence. The loss of the WT allele is seen in the null animals only.