HDL is a major atheroprotective factor, but the mechanisms underlying this effect are still obscure. HDL binding to scavenger receptor-BI has been shown to activate eNOS, although the responsible HDL entities and signaling pathways have remained enigmatic. Here we show that HDL stimulates NO release in human endothelial cells and induces vasodilation in isolated aortae via intracellular Ca2+ mobilization and Akt-mediated eNOS phosphorylation. The vasoactive effects of HDL could be mimicked by three lysophospholipids present in HDL: sphingosylphosphorylcholine (SPC), sphingosine-1-phosphate (S1P), and lysosulfatide (LSF). All three elevated intracellular Ca2+ concentration and activated Akt and eNOS, which resulted in NO release and vasodilation. Deficiency of the lysophospholipid receptor S1P3 (also known as LPB3 and EDG3) abolished the vasodilatory effects of SPC, S1P, and LSF and reduced the effect of HDL by approximately 60%. In endothelial cells from S1P3-deficient mice, Akt phosphorylation and Ca2+ increase in response to HDL and lysophospholipids were severely reduced. In vivo, intra-arterial administration of HDL or lysophospholipids lowered mean arterial blood pressure in rats. In conclusion, we identify HDL as a carrier of bioactive lysophospholipids that regulate vascular tone via S1P3-mediated NO release. This mechanism may contribute to the vasoactive effect of HDL and represent a novel aspect of its antiatherogenic function. 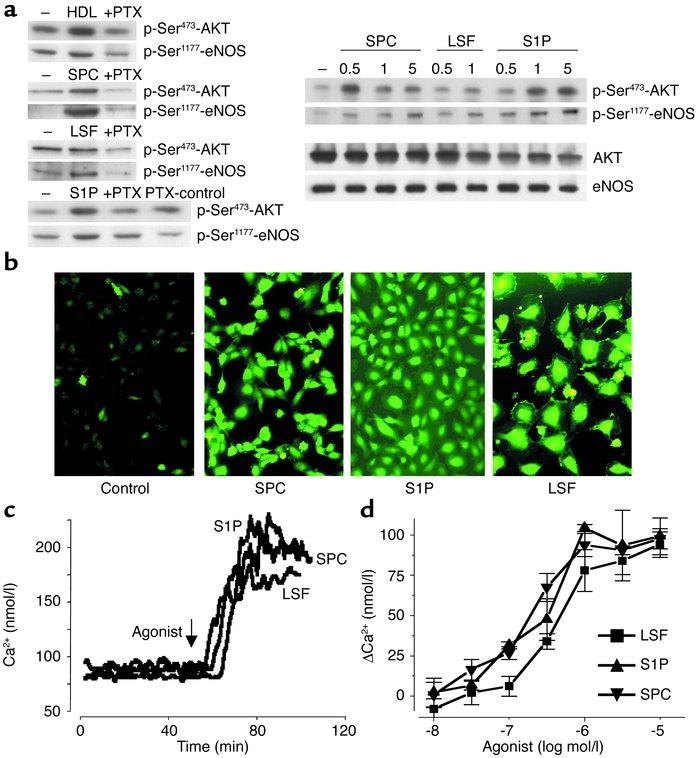 Lysophospholipid signaling mediates HDL-, SPC-, S1P-, and LSF-induced Akt and eNOS phosphorylation as well as [Ca2+]i increase. () HUVECs were stimulated with HDL (0.5 mg/ml) or with 10 μmol/l each (left) or 0.5–5 μmol/l each (right) SPC, S1P, and LSF, with or without preincubation with 100 ng/ml PTX for 16 hours. “PTX control” indicates PTX treatment alone. Cell lysates were analyzed for phospho–Ser473-Akt (p-Ser473-Akt) and phospho–Ser1177-eNOS by Western blotting. Loading controls for total eNOS and total Akt content are shown. All results are representative of one experiment of three. () HUVECs loaded with DAF-2DA were stimulated with SPC, S1P, and LSF (10 μmol/l each) and observed under a fluorescence microscope. Shown are representative results for one experiment of three. () Fura2-AM–loaded HUVECs were stimulated with SPC, S1P, and LSF (10 μmol/l each), and [Ca2+]i was measured by fluorescence spectroscopy. Original tracings from representative experiments were superimposed for comparison. () Concentration dependence of [Ca2+]i increase in HUVECs stimulated with SPC, S1P, and LSF measured as described in .