Obesity is closely associated with the metabolic syndrome, a combination of disorders including insulin resistance, diabetes, dyslipidemia, and hypertension. A role for local glucocorticoid reamplification in obesity and the metabolic syndrome has been suggested. The enzyme 11β-hydroxysteroid dehydrogenase type 1 (11β-HSD1) regenerates active cortisol from inactive 11-keto forms, and aP2-HSD1 mice with relative transgenic overexpression of this enzyme in fat cells develop visceral obesity with insulin resistance and dyslipidemia. Here we report that aP2-HSD1 mice also have high arterial blood pressure (BP). The mice have increased sensitivity to dietary salt and increased plasma levels of angiotensinogen, angiotensin II, and aldosterone. This hypertension is abolished by selective angiotensin II receptor AT-1 antagonist at a low dose that does not affect BP in non-Tg littermates. These findings suggest that activation of the circulating renin-angiotensin system (RAS) develops in aP2-HSD1 mice. The long-term hypertension is further reflected by an appreciable hypertrophy and hyperplasia of the distal tubule epithelium of the nephron, resembling salt-sensitive or angiotensin II–mediated hypertension. Taken together, our findings suggest that overexpression of 11β-HSD1 in fat is sufficient to cause salt-sensitive hypertension mediated by an activated RAS. The potential role of adipose 11β-HSD1 in mediating critical features of the metabolic syndrome extends beyond obesity and metabolic complications to include the most central cardiovascular feature of this disorder. 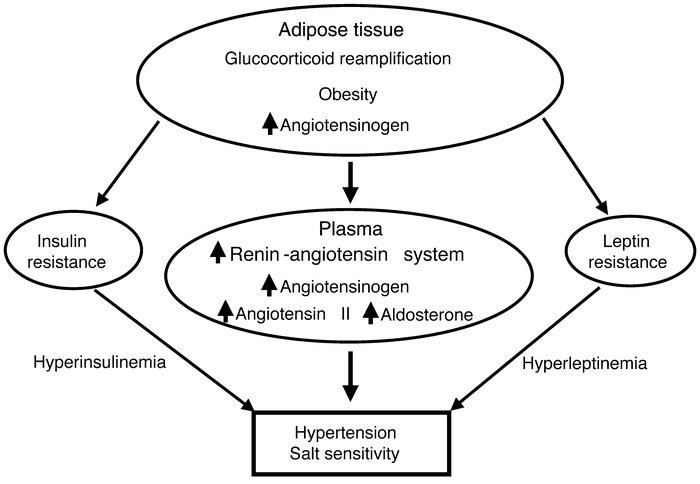 Hypothetical representation of the pathophysiology of hypertension in aP2-HSD1 mice. Along with causing hyperinsulinemia and hyperleptinemia, reamplification of glucocorticoid action in adipose tissue leads to the activation of the circulating RAS and results in blood pressure elevation. This mouse model may provide a unique experimental system to better understand the pathophysiology of hypertension in human metabolic syndrome.