Kaposi sarcoma–associated (KS-associated) herpesvirus (KSHV) infection is linked to the development of both KS and several lymphoproliferative diseases. In all cases, the resulting tumor cells predominantly display latent viral infection. KS tumorigenesis requires ongoing lytic viral replication as well, however, for reasons that are unclear but have been suggested to involve the production of angiogenic or mitogenic factors by lytically infected cells. Here we demonstrate that proliferating cells infected with KSHV in vitro display a marked propensity to segregate latent viral genomes, with only a variable but small subpopulation being capable of stable episome maintenance. Stable maintenance is not due to the enhanced production of viral or host trans-acting factors, but is associated with cis-acting, epigenetic changes in the viral chromosome. These results indicate that acquisition of stable KSHV latency is a multistep process that proceeds with varying degrees of efficiency in different cell types. They also suggest an additional role for lytic replication in sustaining KS tumorigenesis: namely, the recruitment of new cells to latency to replace those that have segregated the viral episome. 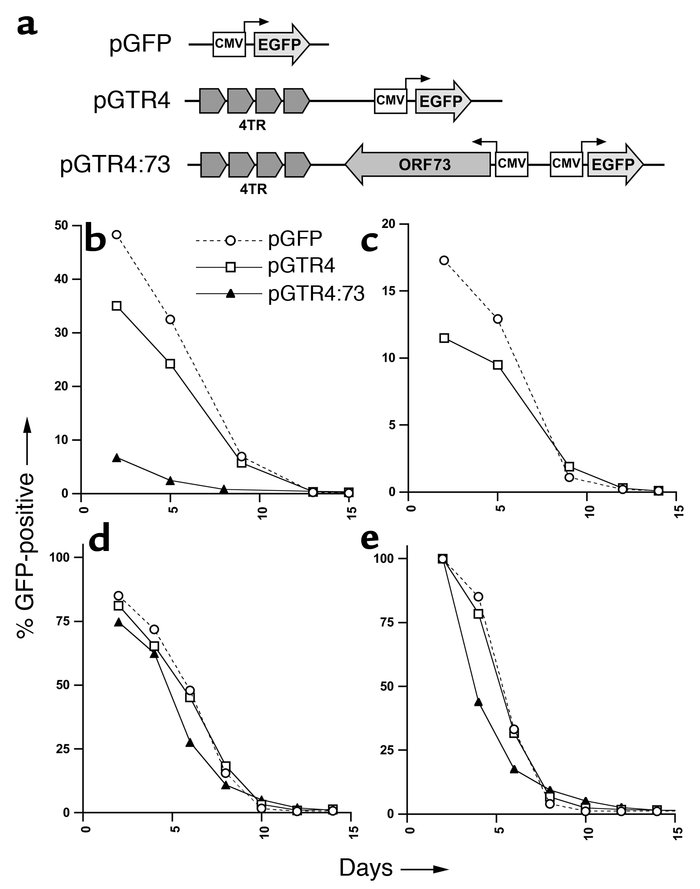 Loss of TR-containing reporter plasmids from transfected cells. () Functional elements of reporter plasmids. The vector backbone pGFP contains a GFP expression cassette driven by the CMV promoter. pGTR4 contains a GFP expression cassette as well as four contiguous units of the viral terminal repeats in authentic head-to-tail orientation. Construct pGTR4:73 contains, in addition to the GFP and TR elements, a CMV promoter–driven expression cassette for ORF73/LANA. (–) FACS analysis of cell lines transfected with the reporter plasmids described above. pGFP (open circles/dashed lines), pGTR4 (open squares/solid lines), or pGTR4:73 (filled triangles/solid lines) were introduced in SLK (), BCBL-1 (), or BJAB cells ( and ). BCBL-1 cells were only transfected with pGFP and pGTR4 because ORF73/LANA is provided by endogenous KSHV episomes. The percentage of GFP-expressing cells was monitored over a period of 13–15 days after transfection by flow cytometry (FACS). (–) Analyses of transfected mass cultures. For the data shown in , BJAB cells were FACS sorted 3 days after transfection for GFP expression in order to eliminate untransfected cells.