Ab’s to the α-chain of the IL-2 receptor (anti-CD25) are used clinically to achieve immunosuppression. Here we investigated the effects of DNA vaccination with the whole CD25 gene on the induction of rat adjuvant arthritis. The DNA vaccine protected the rats and led to a shift in the cytokine profile of T cells responding to disease target antigens from Th1 to Th2. The mechanism of protection was found to involve the induction of an antiergotypic response, rather than the induction of anti-CD25 Ab’s. Antiergotypic T cells respond to activation molecules, ergotopes, expressed on syngeneic activated, but not resting, T cells. CD25-derived peptides function as ergotopes that can be recognized by the antiergotypic T cells. Antiergotypic T cells taken from control sick rats did not proliferate against activated T cells and secreted mainly IFN-γ. In contrast, antiergotypic cells from CD25-DNA–protected rats proliferated against activated T cells and secreted mainly IL-10. Protective antiergotypic T cells were found in both the CD4+ and CD8+ populations and expressed α/β or γ/δ T cell receptors. Antiergotypic α/β T cells were MHC restricted, while γ/δ T cells were MHC independent. Thus, CD25 DNA vaccination may induce protection from autoimmunity by inducing a cytokine shift in both the antiergotypic response and the response to the antigens targeted in the disease. 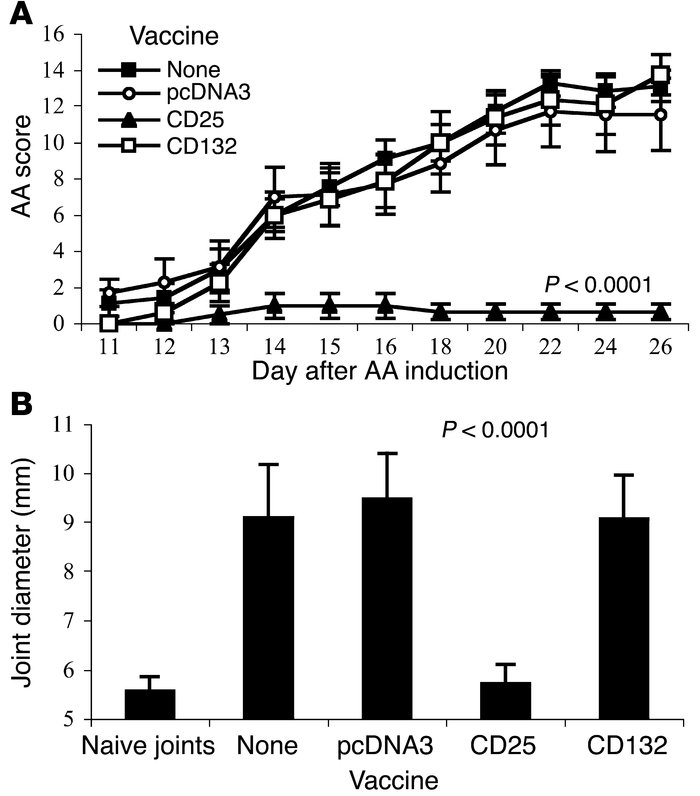 CD25 DNA vaccination protects against AA. (A) Groups of eight rats each were untreated, vaccinated with the empty vector (pcDNA3), the CD25 gene, or the CD132 gene, prior to AA induction (day 0). AA scores were assessed every day or two starting at day 11. The mean ± SEM disease score is shown. Scores of the CD25-vaccinated group were significantly reduced compared with the pcDNA3 group for each of the days 14–26 ( < 0.01). The value of day 26 is indicated. This is a representative experiment of three repetitions. (B) Ankle swelling measured at day 26 after AA induction. The results are presented in millimeters, mean ± SEM, measured for the hindlimb ankle diameter. The value compares the CD25 and pcDNA3 groups.