Pseudohypoaldosteronism type II (PHAII) is an autosomal dominant disorder of hyperkalemia and hypertension. Mutations in two members of the WNK kinase family, WNK1 and WNK4, cause the disease. WNK1 mutations are believed to increase WNK1 expression; the effect of WNK4 mutations remains unknown. The clinical phenotype of PHAII is opposite to Gitelman syndrome, a disease caused by dysfunction of the thiazide-sensitive Na-Cl cotransporter. We tested the hypothesis that WNK kinases regulate the mammalian thiazide-sensitive Na-Cl cotransporter (NCC). Mouse WNK4 was cloned and expressed in Xenopus oocytes with or without NCC. Coexpression with WNK4 suppressed NCC activity by more than 85%. This effect did not result from defects in NCC synthesis or processing, but was associated with an 85% reduction in NCC abundance at the plasma membrane. Unlike WNK4, WNK1 did not affect NCC activity directly. WNK1, however, completely prevented WNK4 inhibition of NCC. Some WNK4 mutations that cause PHAII retained NCC-inhibiting activity, but the Q562E WNK4 demonstrated diminished activity, suggesting that some PHAII mutations lead to loss of NCC inhibition. Gain-of-function WNK1 mutations would be expected to inhibit WNK4 activity, thereby activating NCC, contributing to the PHAII phenotype. Together, these results identify WNK kinases as a previously unrecognized sodium regulatory pathway of the distal nephron. This pathway likely contributes to normal and pathological blood pressure homeostasis. 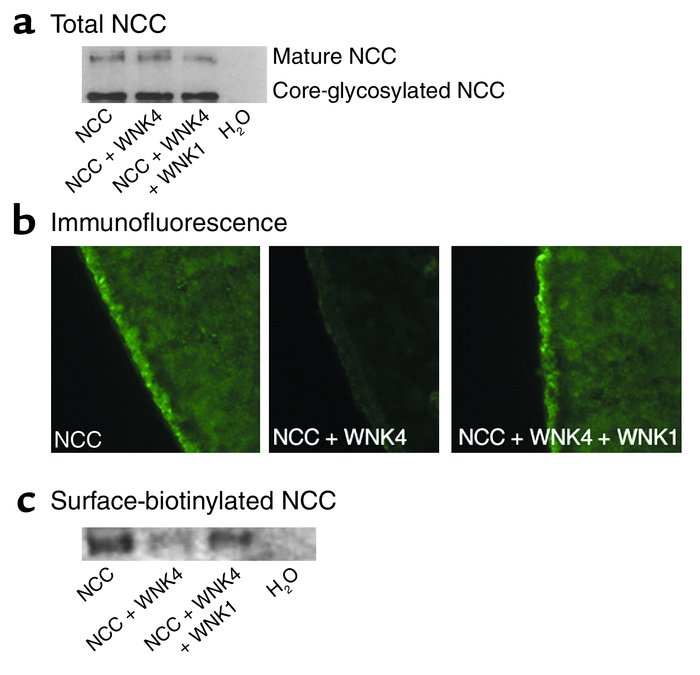