CD1d is expressed on the surface of professional and nonprofessional APCs, including intestinal epithelial cells (IECs), for a role in the presentation of glycolipid-based antigens to subsets of T cells. The mechanisms that regulate CD1d expression in any cell type are unknown. To investigate the possibility that expression of CD1d is influenced by exogenous factors present within the intestinal lumen, CD1d expression was analyzed in several IEC lines after culturing in the presence of lumenal contents (LC) of the normal human intestine. Exposure of the colon-derived cell lines T84, HT-29, and Caco-2 to soluble LC resulted in a marked induction of CD1d expression as determined by RT-PCR, confocal microscopy, cell surface ELISA, and Western blot analysis. Similarly, exposure of human IECs to LC isolated from mice bred in both specific pathogen–free and germfree conditions also resulted in the induction of CD1d expression, with the maximum CD1d-inducing activity observed in the small intestine. Biochemical and biophysical characterization of the human CD1d-inducing activity identified heat shock protein 110 (Hsp110) as a major functional component of the LC that contributes to CD1d surface regulation, and immunolocalization studies revealed Hsp110 expression in subsets of human IECs in vivo. These data support the presence of a novel autocrine pathway of CD1d regulation by Hsp110. 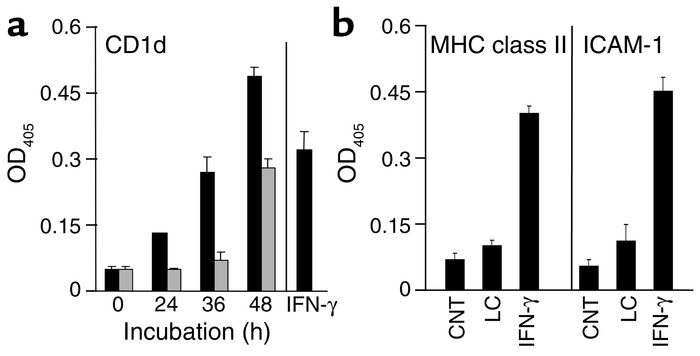 Soluble components present within human LC selectively enhance CD1d expression on the surface of IECs. () Cell surface ELISA of T84 monolayers following incubation with either 6 μg/ml (black bars) or 3 μg/ml (gray bars) of LC sample for varying periods of time. () Relative levels of CD1d, MHC class II, and ICAM-1 expression were compared by ELISA on T84 cells incubated alone (CNT) or in the presence of 6 μg/ml LC sample (LC) for a period of 48 hours. As a positive control for the detection of all inducible epithelial markers, monolayers were exposed to IFN-γ for 48 hours at a final concentration of 1,000 IU/ml. ODs at 405 nm ± SEM, generated by ELISA, were blanked against isotype-matched control antibodies.