The secretory factor VEGF-C has been directly implicated in various physiological processes during embryogenesis and human cancers. However, the importance of the conversion of its precursor proVEGF-C to mature VEGF-C in tumorigenesis, and vessel formation and the identity of the protease(s) that regulate these processes is/are not known. The intracellular processing of proVEGF-C that occurs within the dibasic motif HSIIRR227SL suggests the involvement of the proprotein convertases (PCs) in this process. In addition, furin and VEGF-C were found to be coordinately expressed in adult mouse tissues. Cotransfection of the furin-deficient colon carcinoma cell line LoVo with proVEGF-C and different PC members revealed that furin, PC5, and PC7 are candidate VEGF-C convertases. This finding is consistent with the in vitro digestions of an internally quenched synthetic fluorogenic peptide mimicking the cleavage site of proVEGF-C (220Q-VHSIIRR↓SLP230). The processing of proVEGF-C is blocked by the inhibitory prosegments of furin, PC5, and PACE4, as well as by furin-motif variants of α2-macroglobulin and α1-antitrypsin. Subcutaneous injection of CHO cells stably expressing VEGF-C into nude mice enhanced angiogenesis and lymphangiogenesis, but not tumor growth. In contrast, expression of proVEGF-C obtained following mutation of the cleavage site (HSIIRR227SL to HSIISS227SL) inhibits angiogenesis and lymphangiogenesis as well as tumor growth. Our findings demonstrate the processing of proVEGF-C by PCs and highlight the potential use of PC inhibitors as agents for inhibiting malignancies induced by VEGF-C. 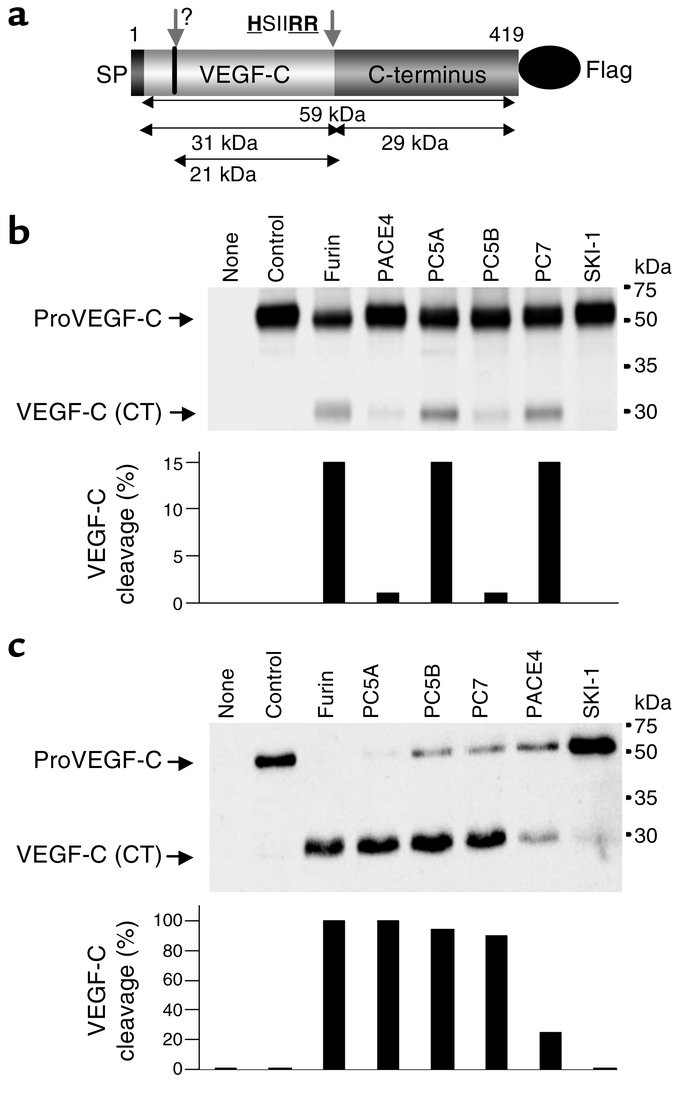 Processing of proVEGF-C by furin, PC5, and PC7. () Schematic representation of the primary structure of the 419-AA human proVEGF-C. Shown are the signal peptide (SP), PC-processing site (HSIIRR227SL), an unknown protease site (indicated by question mark) that generates the 21-kDa VEGF-C, and the Flag attached to the C-terminus. ProVEGF-C processing was analyzed by biosynthesis () and Western blotting () of LoVo-C5–conditioned media obtained from cells transiently transfected with either the empty vectors (None), pIRES2-EGFP vector and pcDNA3-zeo-Flag.cm5 vector containing proVEGF-C (Control), or with the pcDNA3-zeo-Flag.cm5 vector containing proVEGF-C and pIRES2-EGFP vector that expresses full-length human furin, PACE4, or SKI-1; mouse PC5A or PC5B; or rat PC7. The corresponding percentages of proVEGF-C cleavage calculated from the ratio of band intensities of VEGF-C/(proVEGF-C + VEGF-C) are indicated.