EGF promotes proliferation and migration of stem/progenitor cells in the normal adult brain. The effect of epidermal growth factor on neurogenesis in ischemic brain is unknown, however. Here we show that intraventricular administration of EGF and albumin augments 100-fold neuronal replacement in the injured adult mouse striatum after cerebral ischemia. Newly born immature neurons migrate into the ischemic lesion and differentiate into mature parvalbumin-expressing neurons, replacing more than 20% of the interneurons lost by 13 weeks after ischemia and representing 2% of the total BrdU-labeled cells. These data suggest that administration of EGF and albumin could be used to manipulate endogenous neurogenesis in the injured brain and to promote brain self-repair. 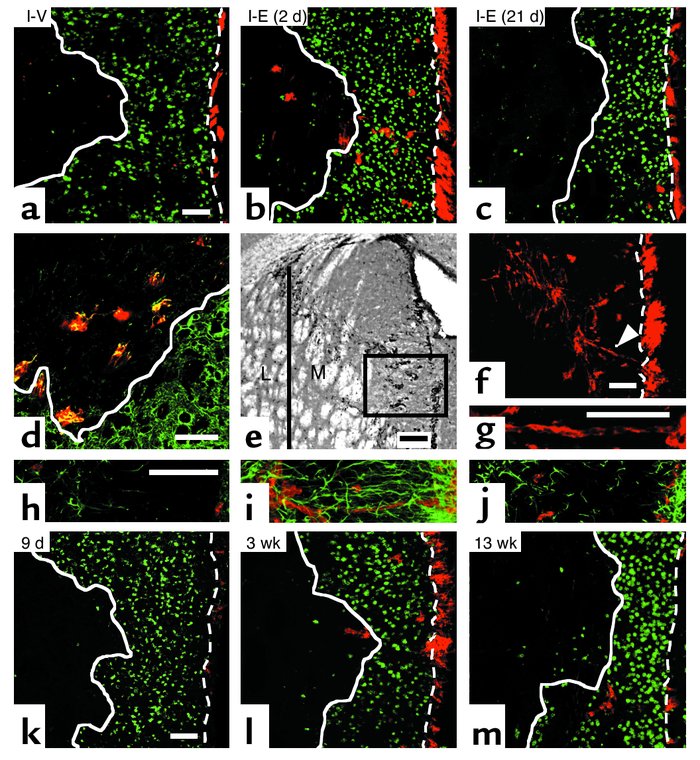 Migrating neuroblasts after EGF treatment. () Using confocal microscopy, 5 weeks after ischemia, very few DCX+ cells (red) were observed in the striatal lesion (white solid line) after vehicle. DCX+ cells dramatically increased by EGF infusion initiated on day 2 () but not on day 21 () ( = 3–4 per group; for quantification see Table ), revealing the importance of EGF signaling for cell migration early after ischemia. () Colocalization of DCX (red) and Tuj1 (green) confirmed their phenotype. () DCX+ cells were predominantly within medial (M) relative to lateral (L) striatum. ( and ) Chains or clusters of DCX+ (red) cells (arrowhead, magnified in ) connecting SVZ and the striatal lesion were observed in medial striatum (). (–) GFAP+ glial cells (green) and DCX+ neuroblasts (red) between SVZ (right end) and the damaged striatum (left side) were rare in vehicle () or with EGF administration initiated at day 21 (), compared with EGF at day 2 post-ischemia (). Note the orientation of GFAP+ processes in (). (–) The spatial distribution and number of DCX+ (red) cells changed with time after EGF. DCX+ cells were few at the end of the infusion period () and progressively increased in the area devoid of NeuN+ cells (green) at 3 weeks () and 5 weeks (). By 13 weeks, DCX+ were mostly outside the lesion (), suggesting that DCX+ cells may have differentiated into mature neurons. Scale bar is 50 μm except for (), 100 μm. Bregma, 0.8 mm. Dotted line, the border between SVZ and striatum.