Synovial fluid cells from joints of rheumatoid arthritis (RA) patients express a novel variant of CD44 (designated CD44vRA), encoding an extra trinucleotide (CAG) transcribed from intronic sequences flanking a variant exon. The CD44vRA mutant was detected in 23 out of 30 RA patients. CD44-negative Namalwa cells transfected with CD44vRA cDNA or with CD44v3-v10 (CD44vRA wild type) cDNA bound FGF-2 to an equal extent via their associated heparan sulfate chains. However, Namalwa cells, immobilizing FGF-2 via their cell surface CD44vRA, bound substantially more soluble FGF receptor-1 (FGFR-1) than did Namalwa cells immobilizing the same amount of FGF-2 via their cell surface CD44v3-v10. The former cells stimulated the proliferation of BaF-32 cells, bearing FGFR-1, more efficiently than did the latter cells. Finally, isolated primary synovial fluid cells from RA patients expressing CD44vRA bound more soluble FGFR-1 to their cell surface–associated FGF-2 than did corresponding synovial cells expressing CD44v3-v10 or synovial cells from osteoarthritis patients. The binding of soluble FGFR-1 to RA synovial cells could be specifically reduced by their preincubation with Ab’s against the v3 exon product of CD44. Hence, FGF-2 attached to the heparan sulfate moiety expressed by the novel CD44 variant of RA synovium cells exhibits an augmented ability to stimulate FGFR-1–mediated activities. A similar mechanism may foster the destructive inflammatory cascade not only in RA, but also in other autoimmune diseases. 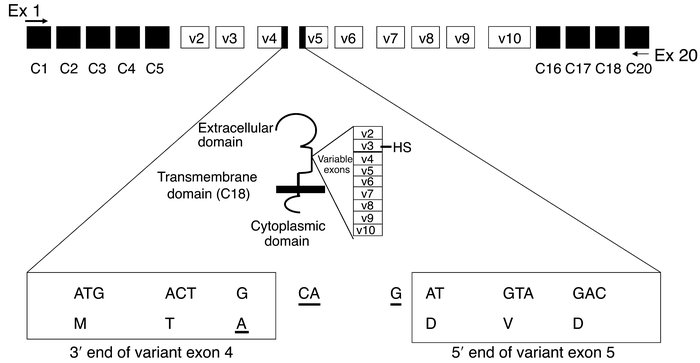 Schematic diagram of the CD44 molecule and the trinculeotide CAG insertion in the CD44v3-v10 sequence of RA patients. A schematic of the CD44 genomic map is shown at the top of the figure. The black squares represent the constant exons (designated C1, C2, etc.) at the two ends of the molecule. The white squares represent the variant exons (designated v2, v3, etc.) subjected to alternative splicing. Differential use of the variant exons generates the different CD44 isoforms, e.g., use of exons v3 to v10 in tandem forms the CD44v3-v10. Note that exon v1 is not included in human CD44. The gap between exon v4 and exon v5 indicates the insertion site of CAG, the extra trinucleotide detected in the CD44 variant of synovial fluid cells (CD44vRA), isolated using RT-PCR from cells removed from the joints of RA patients. Arrows mark the positions and directions of Ex1 sense and Ex20 antisense primers (for sequence, see Methods) used in the above-mentioned RT-PCR. Magnification of the CAG insertion site is shown at the bottom of the figure, indicating the nucleotide sequence at the 3′ end of exon v4 and the 5′ end of exon v5 and its alignment with the published sequence (shown in the boxes) in the same region (). The drawing in the middle of the figure illustrates the single chain of CD44 proteoglycan, emphasizing the position of the variable region. The HS associated with exon v3 marks the attachment site of a heparan sulfate moiety, the GAG chain that binds to FGF-2 in the CD44 variant.