Cell migration and phagocytosis are both important for controlling Mycobacterium tuberculosis infection and are critically dependent on the reorganization of the cytoskeleton. Since CD44 is an adhesion molecule involved in inflammatory responses and is connected to the actin cytoskeleton, we investigated the role of CD44 in both these processes. Macrophage (Mφ) recruitment into M. tuberculosis–infected lungs and delayed-type hypersensitivity sites was impaired in CD44-deficient (CD44–/–) mice. In addition, the number of T lymphocytes and the concentration of the protective key cytokine IFN-γ were reduced in the lungs of infected CD44–/– mice. The production of IFN-γ by splenocytes of CD44–/– mice was profoundly increased upon antigen-specific stimulation. Flow cytometry analysis revealed that soluble CD44 can directly bind to virulent M. tuberculosis. Mycobacteria also interacted with Mφ-associated CD44, as reflected by reduced binding and internalization of bacilli by CD44–/– Mφs. This suggests that CD44 is a receptor on Mφs for binding of M. tuberculosis. CD44–/– mice displayed a decreased survival and an enhanced mycobacterial outgrowth in lungs and liver during pulmonary tuberculosis. In summary, we have identified CD44 as a new Mφ binding site for M. tuberculosis that mediates mycobacterial phagocytosis, Mφ recruitment, and protective immunity against pulmonary tuberculosis. 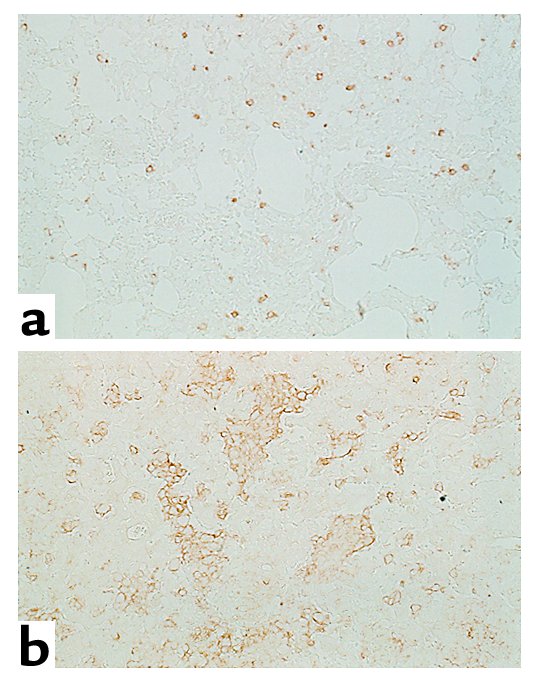 Expression of CD44 in lung tissue of +/+ mice after intranasal infection with 1 × 105. Representative view of the lung of an uninfected mouse stained for CD44, showing only a few CD44+ passenger leukocytes (), compared with the lung of a mouse 5 weeks after infection, showing a prominent influx of CD44+ leukocytes (). ×50.