Orchestrating the unfolded protein response in health and disease

Orchestrating the unfolded protein response in health and disease 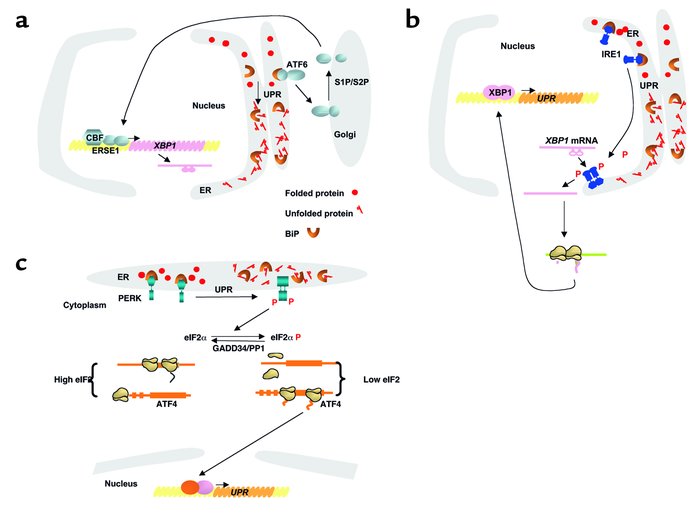 Signaling the UPR in eukaryotes. Three proximal sensors, IRE1, PERK, and ATF6, coordinately regulate the UPR through their various signaling pathways. Whereas IRE1 and PERK are dispensable for many aspects of the response, ATF6 cleavage is required for UPR transcriptional induction and appears to be the most significant of these effectors in mammalian cells. BiP negatively regulates these pathways. BiP interacts with ATF6 to prevent its transport to the Golgi compartment (). BiP binds to the lumenal domains of IRE1 () and PERK () to prevent their dimerization. As unfolded proteins accumulate, they bind BiP and reduce the amount of BiP available to bind and inhibit activation of IRE1, PERK, and ATF6. () BiP release from ATF6 permits transport to the Golgi compartment. In the Golgi, ATF6 is cleaved by S1P and S2P proteases to yield a cytosolic fragment that migrates to the nucleus to activate transcription of responsive genes, including . () BiP release from IRE1 permits dimerization to activate its kinase and RNase activities to initiate XBP1 mRNA splicing. XBP1 splicing removes a 26-base intron, creating a translational frameshift to yield a more potent transcriptional activator. () BiP release permits PERK dimerization and activation to phosphorylate Ser51 on eIF2α to reduce the frequency of AUG initiation codon recognition. As eIF2α phosphorylation reduces the functional level of eIF2, the general rate of translation initiation is reduced. However, selective mRNAs, such as ATF4 mRNA, are preferentially translated under these conditions, possibly by the presence of open reading frames within the 5′ untranslated region of the mRNA. Upon recovery from the UPR, GADD34 targets PP1 to dephosphorylate eIF2α and increase protein translation.