The chemokine receptor CX3CR1 is a proinflammatory leukocyte receptor specific for the chemokine fractalkine (FKN or CX3CL1). In two retrospective studies, CX3CR1 has been implicated in the pathogenesis of atherosclerotic cardiovascular disease (CVD) based on statistical association of a common receptor variant named CX3CR1-M280 with lower prevalence of atherosclerosis, coronary endothelial dysfunction, and acute coronary syndromes. However, the general significance of CX3CR1-M280 and its putative mechanism of action have not previously been defined. Here we show that FKN-dependent cell-cell adhesion under conditions of physiologic shear is severely reduced in cells expressing CX3CR1-M280. This was associated with marked reduction in the kinetics of FKN binding as well as reduced FKN-induced chemotaxis of primary leukocytes from donors homozygous for CX3CR1-M280. We also show that CX3CR1-M280 is independently associated with a lower risk of CVD (adjusted odds ratio, 0.60, P = 0.008) in the Offspring Cohort of the Framingham Heart Study, a long-term prospective study of the risks and natural history of this disease. These data provide mechanism-based and consistent epidemiologic evidence that CX3CR1 may be involved in the pathogenesis of CVD in humans, possibly by supporting leukocyte entry into the coronary artery wall. Moreover, they suggest that CX3CR1-M280 is a genetic risk factor for CVD. 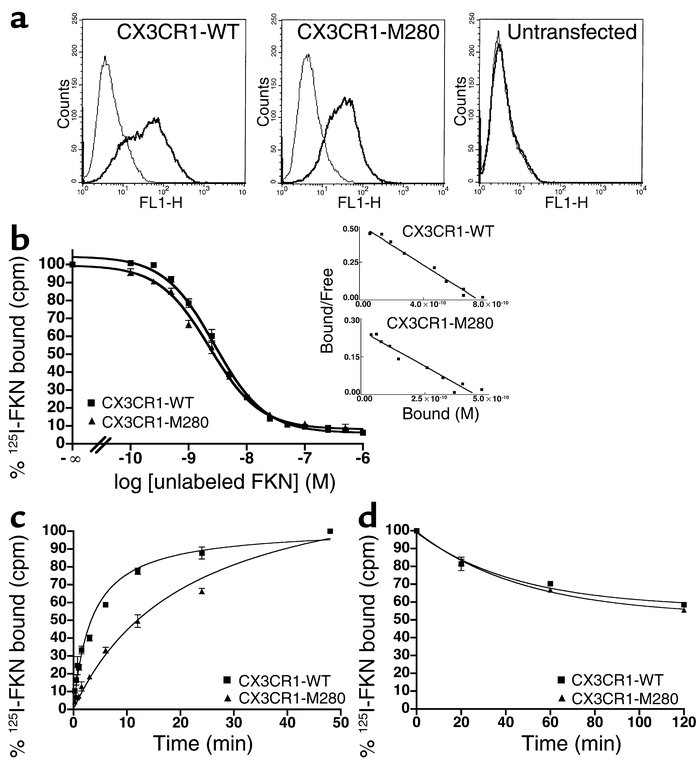