Group B streptococcus (GBS) is an important human pathogen. In this study, we sought to identify mechanisms that may protect GBS from host defenses in addition to its capsular polysaccharide. A gene encoding a cell-surface–associated protein (cspA) was characterized from a highly virulent type III GBS isolate, COH1. Its sequence indicated that it is a subtilisin-like extracellular serine protease homologous to streptococcal C5a peptidases and caseinases of lactic acid bacteria. The wild-type strain cleaved the α chain of human fibrinogen, whereas a cspA mutant, TOH121, was unable to cleave fibrinogen. We observed aggregated material when COH1 was incubated with fibrinogen but not when the mutant strain was treated similarly. This suggested that the product(s) of fibrinogen cleavage have strong adhesive properties and may be similar to fibrin. The cspA gene was present among representative clinical isolates from all nine capsular serotypes, as revealed by Southern blotting. A cspA– mutant was ten times less virulent in a neonatal rat sepsis model of GBS infections, as measured by LD50 analysis. In addition, the cspA– mutant was significantly more sensitive than the wild-type strain to opsonophagocytic killing by human neutrophils in vitro. Taken together, the results suggest that cleavage of fibrinogen by CspA may increase the lethality of GBS infection, potentially by protecting the bacterium from opsonophagocytic killing. 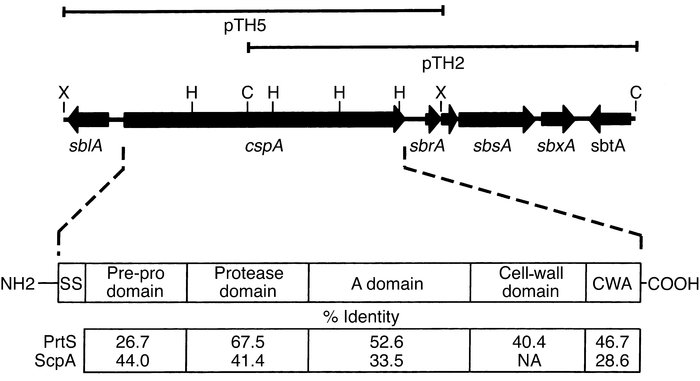 Map of the region in type III GBS. Arrows depict the identified open reading frames and their direction of transcription. Plasmid inserts used to sequence the locus are depicted above the map. The terminal 5′ and 3′ dIII sites at positions 2342 and 5983 were used to replace the internal coding sequence with r. The gene encodes a product of 202 amino acids with no homology to characterized proteins. The 337–amino acid product of s shares significant homology with the C-terminal coding region of numerous tRNA synthetases. Shown below the open reading frame map are protein motifs identified in the predicted sequence of CspA (): signal sequence (residues 1–35), pre-pro domain (residues 36–143), protease domain (residues 144–638), A domain (residues 639–1076), cell-wall spacer domain (residues 1077–1535) and cell-wall anchor domain (residues 1536–1571). An RGD motif () is present in the protease domain and position 446. The function of the A domain is unknown, but it may be involved in regulation or substrate specificity of the protease domain (). C, I; X, I; H, dIII; SS, signal sequence; CWA, cell-wall anchor domain.