Serum anti–T cell receptor (TCR) Ab’s are involved in immune regulation directed against pathogenic T cells in experimental models of autoimmune diseases. Our identification of a dominant T cell population expressing the Vβ5.1 TCR gene (TCRBV5-1), which is responsible for the production of pathogenic anti-acetylcholine receptor (AChR) autoantibodies in HLA-DR3 patients with early-onset myasthenia gravis (EOMG), prompted us to explore the occurrence, reactivity, and regulatory role of anti-TCR Ab’s in EOMG patients and disease controls with clearly defined other autoantibodies. In the absence of prior vaccination against the TCR, EOMG patients had elevated anti-Vβ5.1 Ab’s of the IgG class. This increase was restricted largely to EOMG cases with HLA-DR3 and with less severe disease, and it predicted clinical improvement in follow-up studies. EOMG patient sera containing anti-TCR Ab’s bound specifically the native TCR on intact Vβ5.1-expressing cells and specifically inhibited the proliferation and IFN-γ production of purified Vβ5.1-expressing cells to alloantigens in mixed lymphocyte reaction and the proliferation of a Vβ5.1-expressing T cell clone to an AChR peptide, indicating a regulatory function for these Ab’s. This evidence of spontaneously active anti-Vβ5.1 Ab’s in EOMG patients suggests dynamic protective immune regulation directed against the excess of pathogenic Vβ5.1-expressing T cells. Though not sufficient to prevent a chronic, exacerbated autoimmune process, it might be boosted using a TCR peptide as vaccine. 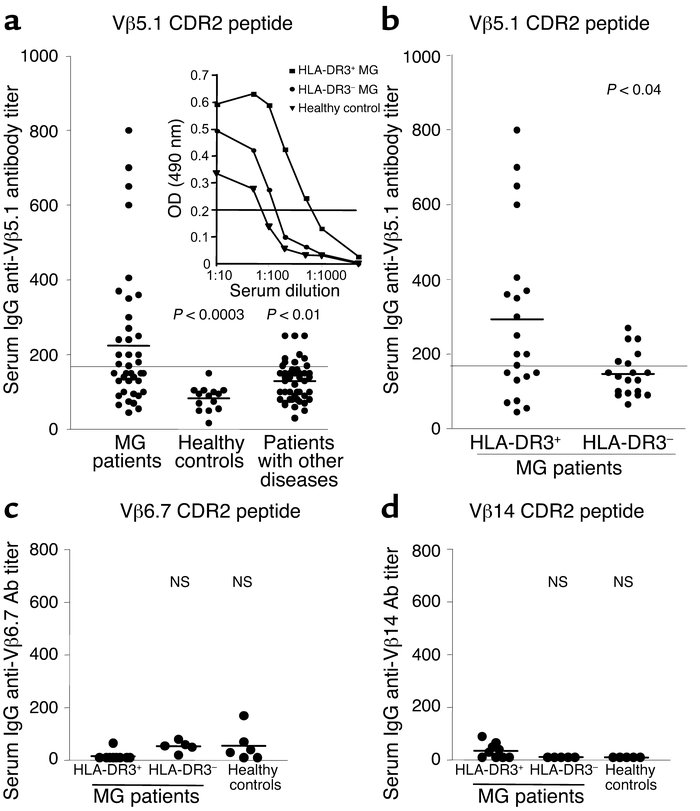 Serum IgG Ab’s against TCR peptides in controls and EOMG patients with or without HLA-DR3 determined by ELISA. Titrations were carried out with serial dilutions of serum from 1:10 to 1:5,000. Sample dilutions were run in duplicate for each individual. The titer was the reciprocal of the dilution giving an OD of 0.2 in the linear portion of the curve in the inset in (), where representative titers were 90, 120, and 700 for a healthy control, an HLA-DR3– MG patient, and an HLA-DR3+ MG patient, respectively. () We tested sera from MG patients who had not undergone prior TCR vaccination ( = 40), age-matched healthy controls ( = 14), and patients with other clearly defined autoantibodies ( = 46). The horizontal line corresponds to the mean titer of healthy controls + 2.6 SD. To compare with the EOMG patients, we used the Mann-Whitney test. () Anti-Vβ5.1 Ab titers in EOMG patients with or without HLA-DR3. Serum titers of Ab’s against CDR2 peptides from Vβ6.7 () or Vβ14 () in HLA-DR3+ EOMG patients ( = 10), HLA-DR3– EOMG patients ( = 5), and healthy controls ( = 6). The values indicated in – were calculated versus the HLA-DR3+ MG patient group. Each point corresponds to an individual patient. Horizontal bars indicate the mean.