Cell surface receptors, ligands, and adhesion molecules underlie development, circuit formation, and synaptic function of the central nervous system and represent important therapeutic targets for many neuropathologies. The functional contributions of interactions between cell surface proteins of neurons and nonneuronal cells have not been fully addressed. Using an unbiased protein-protein interaction screen, we showed that the human immunomodulatory ligand B7-1 (hB7-1) interacts with the p75 neurotrophin receptor (p75NTR) and that the B7-1:p75NTR interaction is a recent evolutionary adaptation present in humans and other primates, but absent in mice, rats, and other lower mammals. The surface of hB7-1 that engages p75NTR overlaps with the hB7-1 surface involved in CTLA-4/CD28 recognition, and these molecules directly compete for binding to p75NTR. Soluble or membrane-bound hB7-1 altered dendritic morphology of cultured hippocampal neurons, with loss of the postsynaptic protein PSD95 in a p75NTR-dependent manner. Abatacept, an FDA-approved therapeutic (CTLA-4–hFc fusion) inhibited these processes. In vivo injection of hB7-1 into the murine subiculum, a hippocampal region affected in Alzheimer’s disease, resulted in p75NTR-dependent pruning of dendritic spines. Here, we report the biochemical interaction between B7-1 and p75NTR, describe biological effects on neuronal morphology, and identify a therapeutic opportunity for treatment of neuroinflammatory diseases. 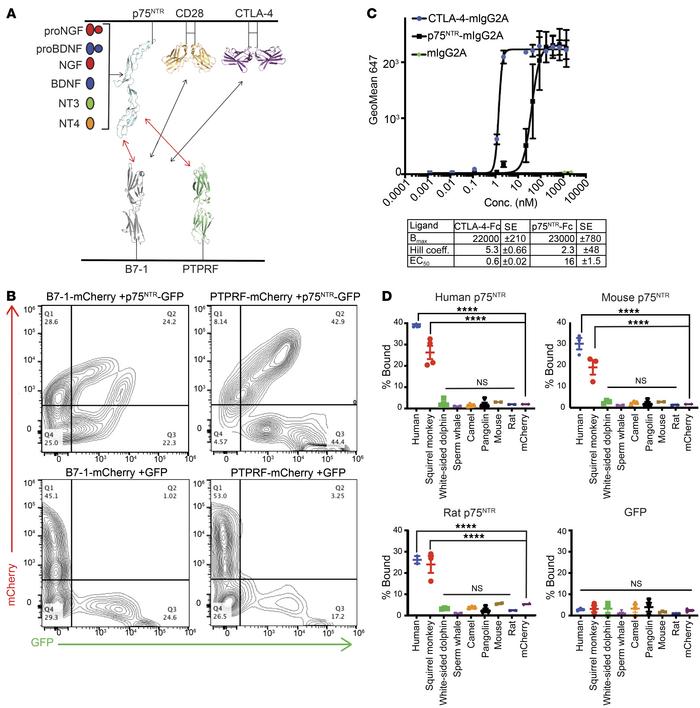