Human β-defensin-3 (hBD-3) exhibits antimicrobial and immunomodulatory activities; however, its contribution to autophagy regulation remains unclear, and the role of autophagy in the regulation of the epidermal barrier in atopic dermatitis (AD) is poorly understood. Here, keratinocyte autophagy was restrained in the skin lesions of patients with AD and murine models of AD. Interestingly, hBD-3 alleviated the IL-4– and IL-13–mediated impairment of the tight junction (TJ) barrier through keratinocyte autophagy activation, which involved aryl hydrocarbon receptor (AhR) signaling. While autophagy deficiency impaired the epidermal barrier and exacerbated inflammation, hBD-3 attenuated skin inflammation and enhanced the TJ barrier in AD. Importantly, hBD-3–mediated improvement of the TJ barrier was abolished in autophagy-deficient AD mice and in AhR-suppressed AD mice, suggesting a role for hBD-3–mediated autophagy in the regulation of the epidermal barrier and inflammation in AD. Thus, autophagy contributes to the pathogenesis of AD, and hBD-3 could be used for therapeutic purposes. 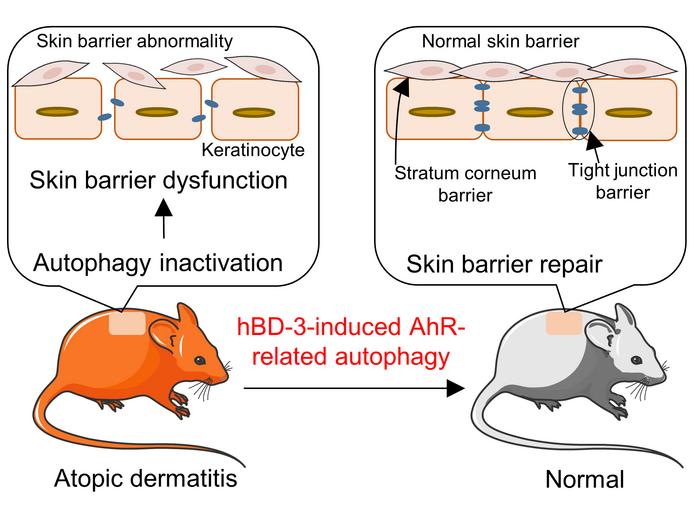