Macrophages are highly heterogeneous immune cells that fulfill tissue-specific functions. Tissue-derived signals play a critical role in determining macrophage heterogeneity. However, these signals remain largely unknown. The BMP receptor activin receptor–like kinase 1 (ALK1) is well known for its role in blood vessel formation; however, its role within the immune system has never been revealed to our knowledge. Here, we found that BMP9/BMP10/ALK1 signaling controlled the identity and self-renewal of Kupffer cells (KCs) through a Smad4-dependent pathway. In contrast, ALK1 was dispensable for the maintenance of macrophages located in the lung, kidney, spleen, and brain. Following ALK1 deletion, KCs were lost over time and were replaced by monocyte-derived macrophages. These hepatic macrophages showed significantly reduced expression of the complement receptor VSIG4 and alterations in immune zonation and morphology, which is important for the tissue-specialized function of KCs. Furthermore, we found that this signaling pathway was important for KC-mediated Listeria monocytogenes capture, as the loss of ALK1 and Smad4 led to a failure of bacterial capture and overwhelming disseminated infections. Thus, ALK1 signaling instructs a tissue-specific phenotype that allows KCs to protect the host from systemic bacterial dissemination.

BMP9 and BMP10 control the expression of the KC-specific signature gene. 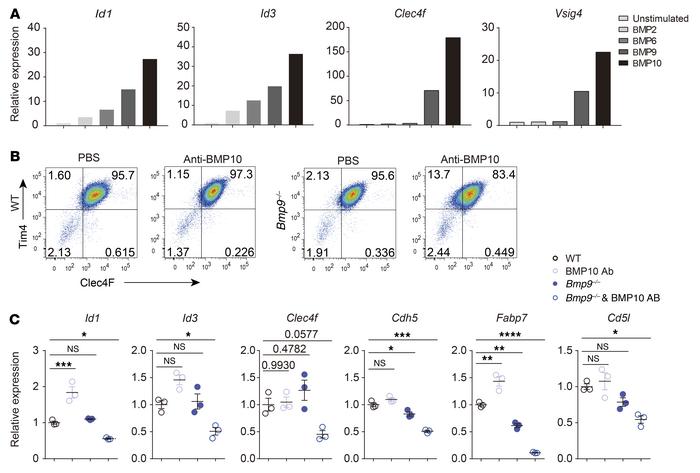