Recent studies have implicated fatty acid-dependent activation of the serine kinase IKKβ, which plays a key role in tissue inflammation, in the pathogenesis of insulin resistance. High doses of salicylates have recently been shown to inhibit IKKβ activity and might therefore ameliorate insulin resistance and improve glucose tolerance in patients with type 2 diabetes. To test this hypothesis, we studied nine type 2 diabetic subjects before and after 2 weeks of treatment with aspirin (∼7 g/d). Subjects underwent mixed-meal tolerance tests and hyperinsulinemic-euglycemic clamps with [6,6-2H2]glucose to assess glucose turnover before and after treatment. High-dose aspirin treatment resulted in a ∼25% reduction in fasting plasma glucose, associated with a ∼15% reduction in total cholesterol and C-reactive protein, a ∼50% reduction in triglycerides, and a ∼30% reduction in insulin clearance, despite no change in body weight. During a mixed-meal tolerance test, the areas under the curve for plasma glucose and fatty acid levels decreased by ∼20% and ∼50%, respectively. Aspirin treatment also resulted in a ∼20% reduction in basal rates of hepatic glucose production and a ∼20% improvement in insulin-stimulated peripheral glucose uptake under matched plasma insulin concentrations during the clamp. In conclusion, these data support the hypothesis that IKKβ represents a new target for treating type 2 diabetes mellitus. 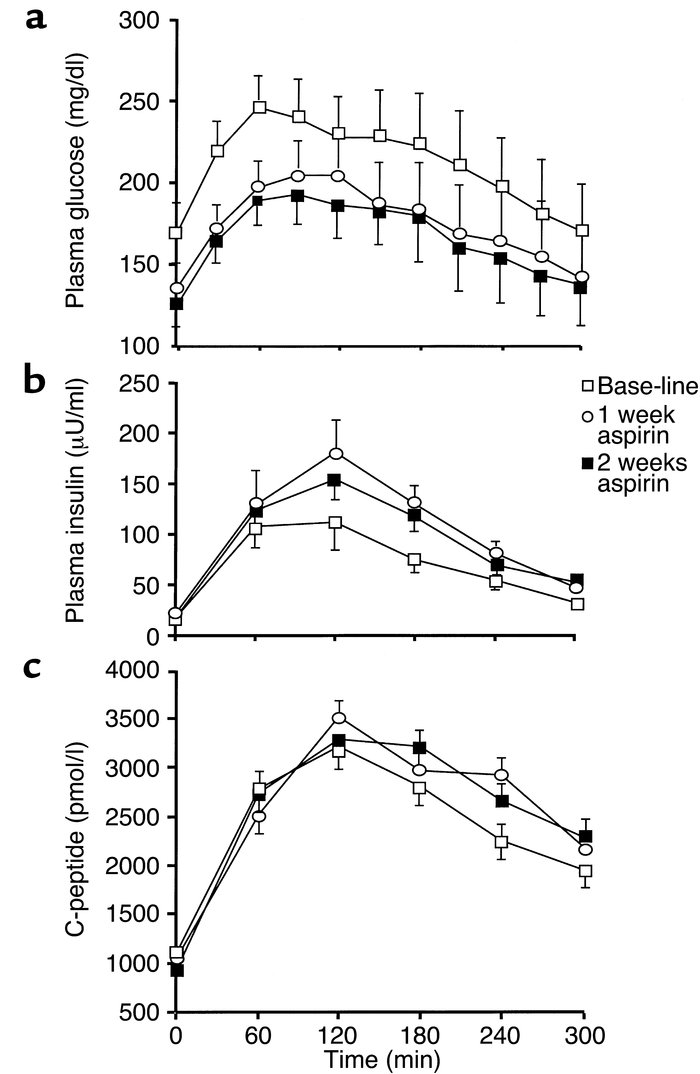