Schema for the emergence of SARS-CoV-2 variants in individuals and populations. 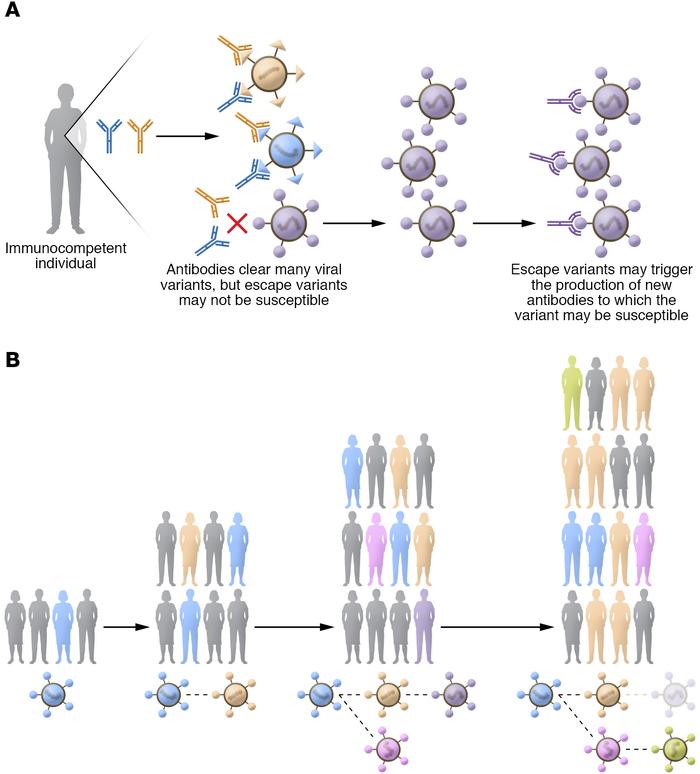 () Within an immunocompetent individual, SARS-CoV-2 infection elicits an antibody response to multiple viral determinants. While these antibodies have the capacity to reduce the viral load, ongoing SARS-CoV-2 replication can result in new viral variants that may or may not be susceptible to existing antibodies. In some individuals, especially those with an impaired ability to produce a robust antibody response, viral variants that escape the antibody (and/or other elements of the immune) response may emerge. On the other hand, variants that emerge in an immunocompetent individual can elicit new antibodies to which the variant is susceptible. Thus, plasma containing antibodies produced by such individuals constitutes an immediately available antiviral agent for emerging variants. () Viral variants emerge at the population level. New viral variants emerge as a result of chance mutations in individuals who are competent for transmission and replication in populations. Deleterious mutations of the virus are eliminated, while neutral or more fit variants spread in the population when transmission is uninterrupted. While individuals infected with these variants may clear them, widespread transmission will continue when the transmission rate exceeds the rate at which individual immune responses achieve virologic control.