Central obesity with cardiometabolic syndrome (CMS) is a major global contributor to human disease, and effective therapies are needed. Here, we show that cyclic GMP–selective phosphodiesterase 9A inhibition (PDE9-I) in both male and ovariectomized female mice suppresses preestablished severe diet-induced obesity/CMS with or without superimposed mild cardiac pressure load. PDE9-I reduces total body, inguinal, hepatic, and myocardial fat; stimulates mitochondrial activity in brown and white fat; and improves CMS, without significantly altering activity or food intake. PDE9 localized at mitochondria, and its inhibition in vitro stimulated lipolysis in a PPARα-dependent manner and increased mitochondrial respiration in both adipocytes and myocytes. PPARα upregulation was required to achieve the lipolytic, antiobesity, and metabolic effects of PDE9-I. All these PDE9-I–induced changes were not observed in obese/CMS nonovariectomized females, indicating a strong sexual dimorphism. We found that PPARα chromatin binding was reoriented away from fat metabolism–regulating genes when stimulated in the presence of coactivated estrogen receptor-α, and this may underlie the dimorphism. These findings have translational relevance given that PDE9-I is already being studied in humans for indications including heart failure, and efficacy against obesity/CMS would enhance its therapeutic utility. 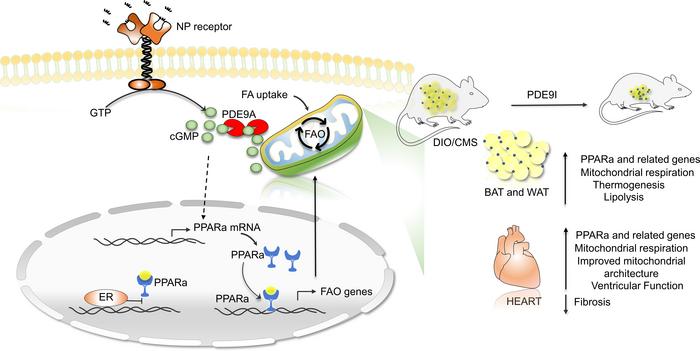