Parathyroid hormone (PTH) is a potent pharmacologic inducer of new bone formation, but no physiologic anabolic effect of PTH on adult bone has been described. We investigated the role of PTH in fetal skeletal development by comparing newborn mice lacking either PTH, PTH-related peptide (PTHrP), or both peptides. PTH-deficient mice were dysmorphic but viable, whereas mice lacking PTHrP died at birth with dyschondroplasia. PTH-deficient mice uniquely demonstrated diminished cartilage matrix mineralization, decreased neovascularization with reduced expression of angiopoietin-1, and reduced metaphyseal osteoblasts and trabecular bone. Compound mutants displayed the combined cartilaginous and osseous defects of both single mutants. These results indicate that coordinated action of both PTH and PTHrP are required to achieve normal fetal skeletal morphogenesis, and they demonstrate an essential function for PTH at the cartilage-bone interface. The effect of PTH on fetal osteoblasts may be relevant to its postnatal anabolic effects on trabecular bone. 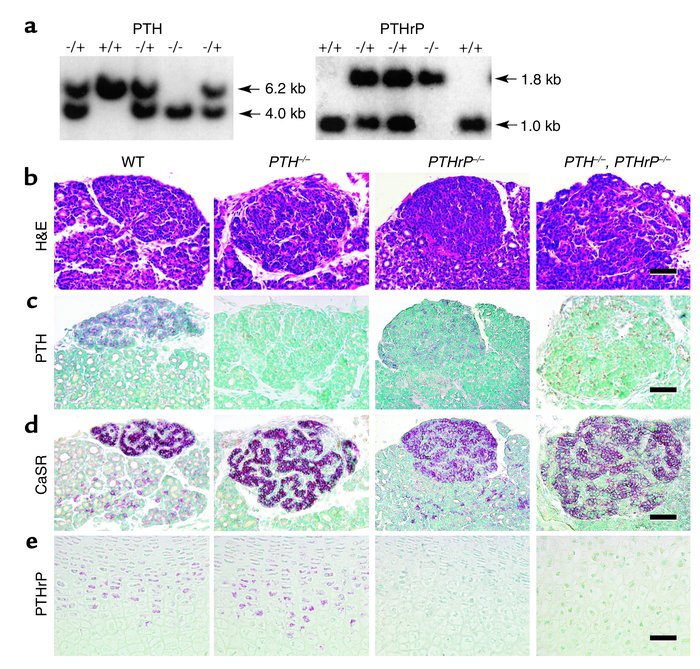 Genotyping of mice and examination of the expression of PTH and PTHrP. () Analysis of genomic DNA isolated from pups born of and matings. For Southern blots, purified DNA was digested with BamHI for PTH and with PvuII for PTHrP. The mutated allele (4.0 kb) and allele (1.8 kb) are distinguished from the wild-type PTH (6.2 kb) and PTHrP (1.0 kb) alleles using the probes described in Methods. (–) Thyroid and parathyroid gland paraffin-embedded sections from wild-type (WT), ; ; and , mice were stained with H&E () and immunostained for PTH () and CaSR (). Paraffin-embedded sections of tibial epiphyseal cartilage were immunostained for PTHrP (). Scale bars represent 50 μm.