Inflammatory disorders of the skin are frequently associated with inflammatory bowel diseases (IBDs). To explore mechanisms by which these organs communicate, we performed single-cell RNA-Seq analysis on fibroblasts from humans and mice with IBD. This analysis revealed that intestinal inflammation promoted differentiation of a subset of intestinal stromal fibroblasts into preadipocytes with innate antimicrobial host defense activity. Furthermore, this process of reactive adipogenesis was exacerbated if mouse skin was inflamed as a result of skin wounding or infection. Since hyaluronan (HA) catabolism is activated during skin injury and fibroblast-to-adipocyte differentiation is dependent on HA, we tested the hypothesis that HA fragments could alter colon fibroblast function by targeted expression of human hyaluronidase-1 in basal keratinocytes from mouse skin. Hyaluronidase expression in the skin activated intestinal stromal fibroblasts, altered the fecal microbiome, and promoted excessive reactive adipogenesis and increased inflammation in the colon after challenge with dextran sodium sulfate. The response to digested HA was dependent on expression of TLR4 by preadipocytes. Collectively, these results suggest that the association between skin inflammation and IBD may be due to recognition by mesenchymal fibroblasts in the colon of HA released during inflammation of the skin. 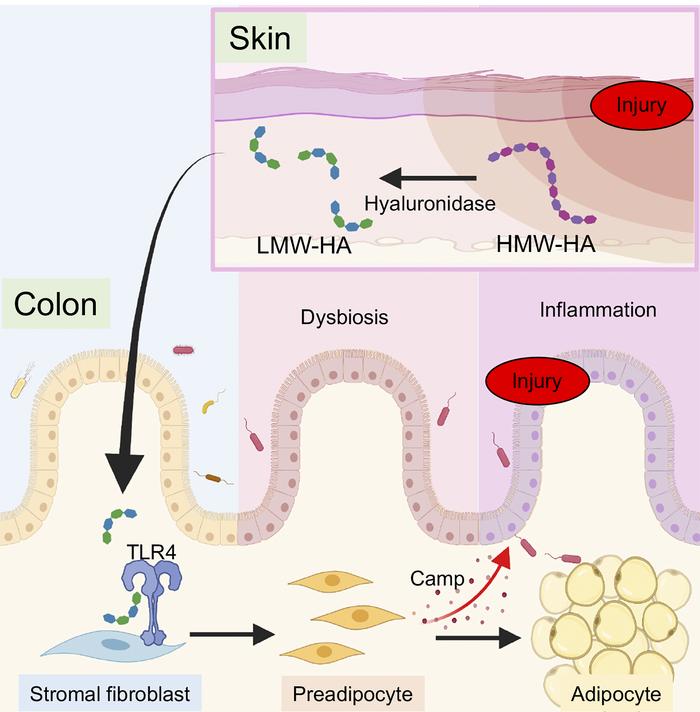