In recent decades, treatments for myocardial infarction (MI), such as stem and progenitor cell therapy, have attracted considerable scientific and clinical attention but failed to improve patient outcomes. These efforts indicate that more rigorous mechanistic and functional testing of potential MI therapies is required. Recent studies have suggested that augmenting post-MI lymphatic growth via VEGF-C administration improves cardiac function. However, the mechanisms underlying this proposed therapeutic approach remain vague and untested. To more rigorously test the role of lymphatic vessel growth after MI, we examined the post-MI cardiac function of mice in which lymphangiogenesis had been blocked genetically by pan-endothelial or lymphatic endothelial loss of the lymphangiogenic receptor VEGFR3 or global loss of the VEGF-C and VEGF-D ligands. The results obtained using all 3 genetic approaches were highly concordant and demonstrated that loss of lymphatic vessel growth did not impair left ventricular ejection fraction 2 weeks after MI in mice. We observed a trend toward excess fluid in the infarcted region of the left ventricle, but immune cell infiltration and clearance were unchanged with loss of expanded lymphatics. These studies refute the hypothesis that lymphangiogenesis contributes significantly to cardiac function after MI, and suggest that any effect of exogenous VEGF-C is likely to be mediated by nonlymphangiogenic mechanisms. 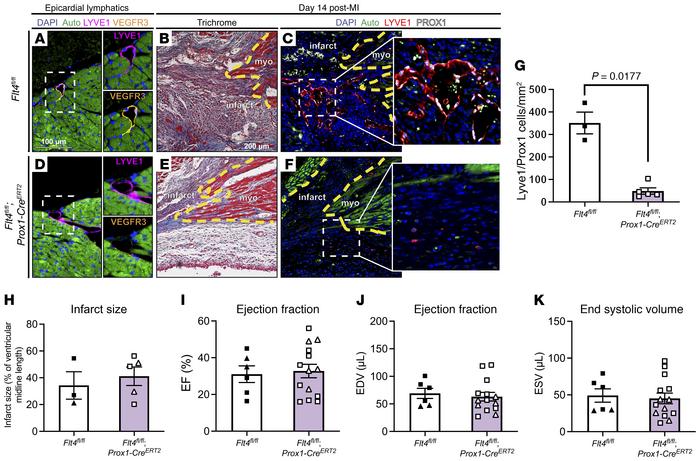