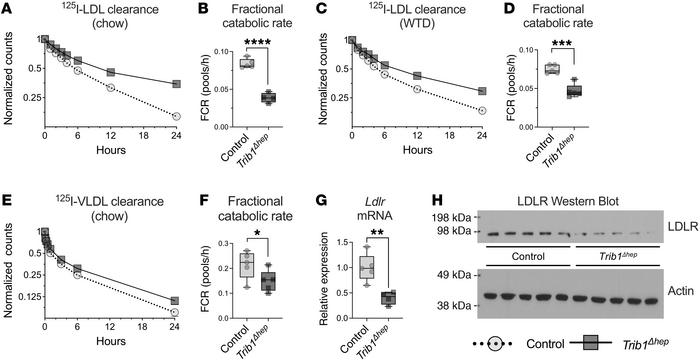 ( and ) LDL clearance in chow-fed mice 8 weeks after AAV injection ( 5) and ( and ) in mice fed WTD for 19 weeks (24 weeks after AAV injection) (–) Mice were injected with 125I-radiolabeled LDL isolated from human plasma. Clearance of 125I-LDL was determined by measuring residual 125I activity at different time points after injection (from 2 minutes to 24 hours). Residual 125I activity is expressed as fraction of the total 125I activity, 2 minutes after injection. ( and ) Fractional catabolic rate (FCR) of LDL from and , calculated from the reciprocal of the area under a fitted biexponential curve, and it represents fraction of LDL cleared per hour. Results were confirmed in an independent cohort in chow-fed mice and 2 independent cohorts in WTD-fed mice. () VLDL clearance in chow-fed male mice 8 weeks after AAV injection. Mice were injected with 125I-radiolabeled human VLDL, and the total remaining counts were normalized to the injected dose at 1 minute after injection of 125IVLDL. () FCR of 125I-VLDL. () Hepatic transcript levels of LDLR in chow-fed male Trib1Δhep mice relative to control mice 8 weeks after AAV injection ( 5). The relative quantity of mRNA normalized to the combined mean Ct of Mrlp19, Ywhaz, and Ipo8, and expressed relative to the mean of the control group. () Hepatic protein levels of LDLR and β-actin in control and Trib1Δhep mice ( 5). Both LDLR mRNA and protein levels changes were confirmed in 3 independent cohorts. (, , and ) Data are expressed as mean ± SEM for the experimental group. (, , , and ) Box plots indicate median and 25th and 75th percentiles, with whiskers extending to minimum and maximum values. Symbols indicate individual values. Significance was determined by 2-tailed, unpaired Student’s test (** 0.01, *** 0.001, **** 0.0001).