Intellectual and social disabilities are common comorbidities in adolescents and adults with MAGE family member L2 (MAGEL2) gene deficiency characterizing the Prader-Willi and Schaaf-Yang neurodevelopmental syndromes. The cellular and molecular mechanisms underlying the risk for autism in these syndromes are not understood. We asked whether vasopressin functions are altered by MAGEL2 deficiency and whether a treatment with vasopressin could alleviate the disabilities of social behavior. We used Magel2-knockout mice (adult males) combined with optogenetic or pharmacological tools to characterize disease modifications in the vasopressinergic brain system and monitor its impact on neurophysiological and behavioral functions. We found that the activation of vasopressin neurons and projections in the lateral septum were inappropriate for performing a social habituation/discrimination task. Mechanistically, the lack of vasopressin impeded the deactivation of somatostatin neurons in the lateral septum, which predicted social discrimination deficits. Correction of vasopressin septal content by administration or optogenetic stimulation of projecting axons suppressed the activity of somatostatin neurons and ameliorated social behavior. This preclinical study identified vasopressin in the lateral septum as a key factor in the pathophysiology of Magel2-related neurodevelopmental syndromes. 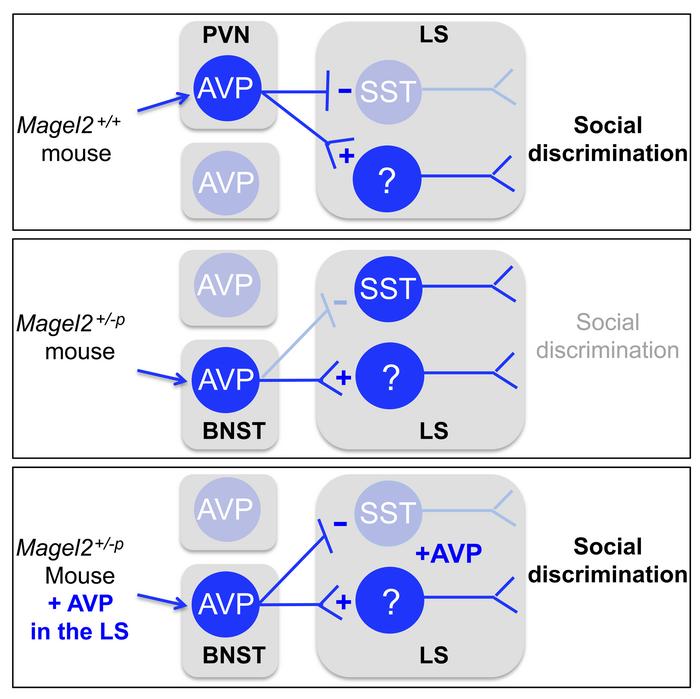