The homeodomain transcription factor Pdx1 is required for pancreas development, including the differentiation and function of β cells. Mutations in Pdx1 or upstream hepatocyte nuclear factors cause autosomal forms of early-onset diabetes (maturity-onset diabetes of the young [MODY]). In mice, the Irs2 branch of the insulin/Igf signaling system mediates peripheral insulin action and pancreatic β cell growth and function. To investigate whether β cell failure in Irs2–/– mice might be related to dysfunction of MODY-related transcription factors, we measured the expression of Pdx1 in islets from young Irs2–/– mice. Before the onset of diabetes, Pdx1 was reduced in islets from Irs2–/– mice, whereas it was expressed normally in islets from wild-type or Irs1–/– mice, which do not develop diabetes. Whereas male Irs2–/–Pdx1+/+ mice developed diabetes between 8 and 10 weeks of age, haploinsufficiency for Pdx1 caused diabetes in newborn Irs2–/– mice. By contrast, transgenic expression of Pdx1 restored β cell mass and function in Irs2–/– mice and promoted glucose tolerance throughout life, as these mice survived for at least 20 months without diabetes. Our results suggest that dysregulation of Pdx1 might represent a common link between ordinary type 2 diabetes and MODY. 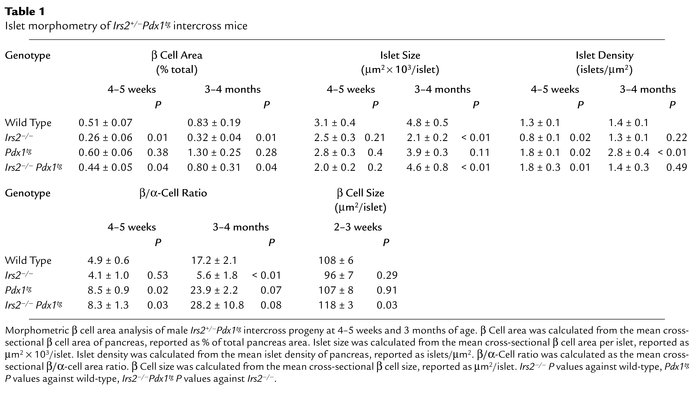